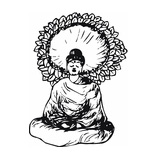 By Ginger Hutton | June 2008
Ginger Hutton, a convert to Catholicism, is a freelance writer whose column "Obsessions" appears in The East Tennessee Catholic, the official newspaper of the Diocese of Knoxville.

Before lunch at my retreat with Sister Joyce Rupp, I automatically lifted my hand to my forehead to make the sign of the cross. That’s when I realized that in this retreat for Catholics in a Catholic parish, led by a Catholic sister, the sign of the cross had never been made. Not once. Over the course of seven hours, it never was. Although I had come to the retreat with serious concerns about Sr. Rupp’s spiritual philosophy, I was still shocked by such a blatant omission. As it turns out, I really shouldn’t have been surprised.

Servite Sister Joyce Rupp is a popular author and retreat director who receives over 400 requests for retreats annually. The 20 retreats she grants each year are almost always given for capacity crowds of several hundred. She holds a masters degree in religious education from St. Thomas University in Houston, and has worked in catechetics and education for most of her life. On the basis of these credentials, she is a regular speaker at some of the largest and most influential catechetical conferences in the country, including the National Catholic Education Association and Roger Cardinal Mahony’s massive Archdiocesan Cate­chetical Congress in Los Angeles.

However, Sr. Rupp has some far more disturbing credentials. Her second masters degree is in trans­personal psychology from the notorious Institute of Transpersonal Psychology in Palo Alto, California. To understand the problems with the December 2007 retreat I attended, it is necessary to know a bit about transpersonal psychology. This is the branch of psychology that the Pontifical Councils for Culture and for Interreligious Dialogue identified as “the classic approach in New Age” (Jesus Christ: The Bearer of the Water of Life, #2.3.4.1). It is a just assessment. The course offerings in the Institute’s catalog are a snapshot of New Age syncretism, with classes in shamanism, the goddess, Jungian psychology, ESP, and Eastern spirituality. Underlying this is a profoundly Gnostic and relativist concept of the world in which God is sought almost exclusively within the individual and his experience of personal transformation and growth in “wisdom” through contact with “the Higher Self.” This higher self — which is called by many different names, including simply “soul” — is good in its essence, has no need of salvation, and is inseparable in any real way from the divine. It is by discovering the higher self that one discovers inner wisdom. This alleged wisdom amounts to the revelation that there is no real difference between you and God; you have all that you need to know within you, and need merely to remember or rediscover it.

The founder of a major pro-abortion group, one who spent a lifetime spitting on Catholic principles, at life's end approaches the Celestial Bench...