Volume > Issue > On Gratitude & Growing Up 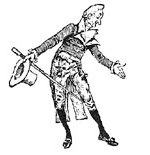 On Gratitude & Growing Up

By Matthew Anger | April 2013
Matthew Anger resides in Richmond, Virginia, where he works for the marketing department of a professional services firm. He is a veteran Catholic writer whose articles have appeared in numerous journals, including The Latin Mass and Homiletic & Pastoral Review.

Great Expectations is a coming-of-age novel set in early nineteenth-century England narrated by Phillip Pirrup (“Pip”), an orphaned boy who is the ward of a strict and unloving older sister, Mrs. Joe, and her gentle husband, Joe Gargery. From humble and impoverished beginnings as an apprentice blacksmith, Pip rises into manhood full of brightened prospects thanks to the generous stipend of a secret benefactor. He leaves the countryside for the bustling metropolis of London, where he finds new friends and new pastimes. His material success, however, proves fleeting. Pip faces a series of disappointments, from unrequited love to the eventual unraveling of his plans of becoming a wealthy gentleman. It is only by transcending these trials and recognizing his own inconstancy and selfishness that Pip achieves true manhood.

The novel’s opening chapter treats us to the best in Dickens’s repertoire: pathos, innocence, and an oddly delightful penchant for grotesque settings. On Christmas Eve, Pip is visiting his parents’ gravesite amid the bleak marshes of his native town when he is startled by the fearsome appearance of an escaped convict, Abel Mag­witch. In a serio-comic manner, Magwitch tells Pip that he desperately needs food and a file to remove his leg-irons, using such ungrammatical lines as “I ain’t alone, as you may think I am. There’s a young man hid with me, in comparison with which young man I am a Angel.” Later, the ill-clad, shivering convict is looking gloomily around the old churchyard, and says to himself, “I wish I was a frog. Or a eel!”

Dickens novels are invariably rich in mood and setting. But just as important are their moral themes. As literary historian Humphrey House explains in The Dickens World, a feature of nineteenth-century English literature that “most distinguished it from its counterparts in other countries of Europe was the habitual use of Christian language.” This is admittedly an over-simplification. Dickens’s language is often more oblique in its religious references than that of contemporary European authors like Alessandro Manzoni and Fyodor Dostoyevsky. But there can be no denying its sympathy with basic Christian virtues.

Another ingredient in the success of Great Expectations is it accessibility. It is relatively concise, and like Dickens’s other first-person novel, David Copperfield, the tale maintains a tighter focus than the meandering and often bewildering scope of his other stories. Finally, while the tone is socially scrutinizing, it avoids the clumsy preaching of Hard Times and Dombey and Son, which have never ranked as high with the reading public. This is evident in the treatment of Mr. Jaggers, the lawyer who manages Pip’s fortune. He is more nuanced than Dick­ens’s typical “man of business.” He is an imperfect being, spiritually stunted in many ways, yet he is not malevolent. Behind a façade of professional bluntness we catch glimpses of conscience that are all the more impressive in that they are manifested in guarded deeds rather than demonstrative platitudes.