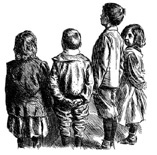 SEEKING THE TRUE, OBJECTIVE GOOD OF THE OTHER

By Casey Chalk | November 2021
Casey Chalk, a Contributing Editor of the NOR, is a contributor to The American Conservative and The Federalist. His first book, The Persecuted: True Stories of Courageous Christians Living Their Faith in Muslim Lands, will be published by Sophia Institute Press this month.

“We read to know we are not alone.” So says C.S. Lewis in William Nicholson’s play Shadowlands. As an introvert with a compulsion for reading, I appreciate the sentiment. As someone with a similar penchant for authoring the written word, I’m inclined to say we write for the same reason.

Loneliness is part of the reason I got into writing. When my wife, first child, and I moved to Bangkok in 2014, I sorely missed my friends back in the States. Keeping in touch with them was difficult due to the time difference (11 or 12 hours, depending on daylight savings time). I yearned, in particular, for the kinds of intellectual — or, perhaps more accurately, pseudo-intellectual — conversations I had with members of my men’s Bible-study group in Virginia.

Deprived of that intellectual outlet, I took to writing. The NOR graciously published one of my early attempts. The articles I wrote provoked email exchanges not only with friends and family back home but with perfect strangers.

Sometimes the responses from unknown readers were short and cordial. Sometimes they were disgruntled and condemnatory. And sometimes they were just plain bizarre, picking obscure fights with me over some peripheral point I had made, or asking me for some odd favor.

Much to my surprise, my writing has generated many friendships over the past six years. Some of those friends are editors, fellow writers, and book publicists, while others are casual or regular readers. Several of them I now count as my closest friends.

Understanding and succeeding in friendship is a regrettably overlooked exercise. Advice columns, books, websites, and mobile applications are devoted to romantic relationships: how to pursue them, how to procure them, and how to preserve them. Much less attention is paid to platonic friendships.

America’s conception of sex is downright sophomoric, and its overhaul starts with understanding what sex is and what it is for.

Conservatism at the Crossroads

The American founders followed Plato and Aristotle in acknowledging man’s inclination to consolidate power, indulge his passions, and oppress his fellowman.