Volume > Issue > Off the Beaten Path 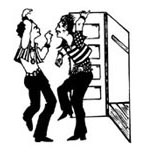 By Ray Cavanaugh | May 2012
Ray Cavanaugh is a graduate of Boston College. His Celtic Scribe column has appeared in publications from London to Vancouver.

The name Jack Kerouac is synonymous with the itinerancy and exuberant libertinism of the Beat Generation. Many would say that the Lowell, Massachusetts, native was as much an icon as a writer. And icons, like writers, can have tremendous influence on the culture — for better or worse.

More than forty years after his death, Kerouac’s enduring image as a pop icon is still seductive and continues to call up real-life and literary imitators: hipster drifters as well as the worst sort of confessional “stream of consciousness” hacks. Who knows how many youths have gone “on the road” — some never to return — searching for that vaguely enlightened beatnik coffee shop, lurking ghostlike at the end of an extended Greyhound itinerary.

Born to working-class French-Canadian immigrants, Kerouac learned English as a second language. He was a quiet child who grew into a husky football star by high school; he earned a football scholarship to Columbia University, but a leg injury terminated his career on the gridiron.

The injured jock soon quit school altogether and embarked on an unsuccessful military career. He later returned to his old college campus, not to resume studies but to reconnect with his wayward buddies. And how colorful these pals were! There was Allen Ginsberg, a sexually deviant poet with communist leanings; William Bur­roughs, an opiate-addicted novelist who shot his common-law wife in the head; Neal Cassady, an incorrigible car thief and bigamist; and Lucien Carr, a dissipated rich kid who served time for manslaughter and nearly landed Kerouac in jail as an accessory after the fact.

Cheever is a melioristic figure in contemporary literature. But whether such a tatterdemalion figure can be “baptized” is another matter.