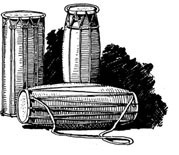 MTV: A Recruiting Ground For Priests?

Throughout the past three decades, the national bishops’ bureaucracy and many bishops have consistently denied that any real problem exists in U.S. seminaries and with the formation of priests. Thus they have laid the blame for the developing vocations crisis on forces external to the seminary and even foreign to the Church. It is the classic scapegoat approach: Don’t admit that you are part of the problem.

But denial has resulted in desperation, as evidenced by the tactics many American bishops are taking to encourage vocations. Gimmicks such as comic books, basketball games, billboards, and television commercials are replacing authentic outreach in the parish, the family, and Catholic schools.

The Diocese of Des Moines holds basketball games, for instance, with a traveling team of priests called “The Running Revs,” and advertises on billboards with messages like “White Collar Workers Needed: Priesthood” and “Priesthood: It’s Awesome.”

In January 1999 the Diocese of Providence, one of the more liberal East Coast dioceses, initiated a major media blitz to “target” potential candidates to the priesthood. In addition to billboards (and a website and newspaper ads), the Diocese has been running television commercials on the MTV network, a pop/rock music video station that doesn’t exactly promote Catholic morals, thought, or teaching. The Diocese’s Vocations Director explained that “the best place to reach potential candidates would be on MTV and the Comedy Channel,” presumably because viewing patterns show that these are the two most popular networks among men aged 18-35.

I have confidence in the general form of government established by the American Constitution, and…

It's Always the Family

Whoever said that pornography is a victimless crime? The family is usually the first to suffer.

The Department of Defense wants to sell pornography, and even though the law prohibits them, they found a way to do it.