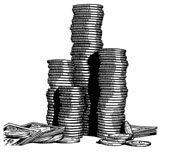 In this election season, as with every recent election season, the topic of primary concern is the economy. But the finances on the mind of the folks at The Economist aren’t the same ones that are occupying the interest of U.S. election-watchers. Rather, the staff at this staid British publication has attempted to gaze deeply into the labyrinthine money-management habits of the Catholic Church. And the view, they say, is “not flattering.”

The finances of the Catholic Church in America are an “unholy mess,” The Economist reports (Aug. 18). The Church’s “management of money is often sloppy,” and unscrupulous churchmen have been engaged in “ungainly financial contortions” and “questionable business practices.” The sex-abuse crisis of 2002 and beyond has led to a “liquidity crisis,” the magazine asserts, which has “encouraged a pre-existing trend towards replacing dollars from the faithful with publicly raised debt.” Yet the Church’s “increased reliance on taxpayers has not been matched by increased openness and accountability.”

To quantify its case, The Economist offers some estimates of the aggregate finances of the Church in Amer­ica — estimates that were seemingly pulled out of a hat. The magazine states that “annual spending by the church and entities owned by the church was around $170 billion in 2010.” How they settled on this figure they’re not saying. But neither is the Church, which, the magazine hastens to add, “does not release such figures.” Nevertheless, the brave thinkers at The Econo­mist have attempted to track the flow of this twelve-figure outflowing: “We think 57% of this goes on health-care networks, followed by 28% on colleges, with parish and diocesan day-to-day operations accounting for just 6% and national charitable activities just 2.7%.” That last figure thought up by The Econ­omist seems frightfully low. Yet the magazine acknowledges the Church as “the largest single charitable organization in the country.” How could this be?

Before any of us tosses our tithing envelopes into the trash, let’s stop to consider that, as pointed out by Mark Gray, a research associate at Georgetown Uni­versity’s Center for Applied Research in the Apostolate, there is no such thing as the “U.S. Catholic Church.” There is no legal entity with that designation and, therefore, no CEO or board of directors overseeing the finances — either income or expenditures — of such an entity. While the Church at large is responsible for vast and impressive charitable works, it is not a “single organization.” As Gray notes, the “separate aspects of the Church operate for the most part independently — with their own leadership, budgets, revenues, and obligations.”