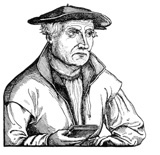 A RESPONSE TO THOMAS STORCK

By S.M. Hutchens | January 2002
S.M. Hutchens is a Senior Editor of Touchstone: A Journal of Mere Christianity.

In the July-August 2001 NEW OXFORD REVIEW, Thomas Storck casts the gauntlet before C.S. Lewis’s concept of “mere Christianity” and any Catholic inclined to resonate with it. (Storck’s article is titled “Is There Such a Thing as ‘Mere Christianity’?” and is subtitled “By What Authority Does C.S. Lewis Pontificate?”) One might expect an editor of Touchstone, a magazine subtitled A Journal of Mere Christianity, which includes a good many Catholics on its editorial staff, to take it up. I do so here on my own, as a Protestant, proposing to speak for, without speaking the minds of, my Catholic colleagues. Not all of them are great devotees of Lewis. (James Hitchcock wrote a rather notorious article for Crisis several years ago in which he wondered out loud what all the fuss over Lewis was about.) All of them have, however, chosen not to take offense at the subtitle of the journal for which they write. There are Catholic reasons for their collaboration in what a Protestant may call mere Christianity, and which the Catholic Church recognizes as fellowship in the Gospel. This is not to say that I regard Storck’s thesis — that “mere Christianity” as Lewis defines it is a non-Catholic idea — to be incorrect, but the manner in which he states it calls for comment.

Storck argues that the concept of mere Christianity, expounded by Lewis as evidenced by faith and morals common to all Christians, “is one that an orthodox Catholic cannot entertain, because implicit in it is a denial of the supreme importance of the Catholic faith as the complete revelation of God, together with a corresponding tendency to consider the Catholic Church as simply one among the many ‘denominations’ of Christianity.”

The principal difficulties he finds are those of authority and certitude. How does one know what those common beliefs are? How does one decide which are the competent doctors and councils? Says Storck: “Lewis has no way of determining the boundary between orthodoxy and heresy. In the end, Lewis himself decides what the basic and defining doctrines are….” Along with this tendency to define what doctrines are essential goes the highly un-Catholic tendency to identify those which are not, for while a Catholic may regard one doctrine as more fundamental than another, he understands revealed truth to be a whole, and thus every doctrine as an indispensable part of Christian revelation.

Nor is mere Christianity as unifying a principle as it might superficially appear. As critical as the doctrines of Baptism, Holy Communion, Confirmation, Ordination, Original Sin, nature and grace, for example, are, there is radical divergence between the Catholic understanding of these and the various Protestant proposals. There is no doctrine of salvation common to all professing Christians.