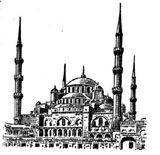 IS THERE HOPE FOR CATHOLIC-ORTHODOX REUNION?

Much of my teenage years were spent in the San Fernando Valley of California, at that time (the mid-70s) a religious and cultural wasteland. Apart from the outlets described in that article, another appeared; I discovered the Eastern Rites of the Church, and the Orthodox Churches.

My father, Guy, first stimulated my interest in this area, as in so many others. His tales of valiant Christians maintaining their faith and traditions under Muslim and Communist domination fired the imagination. My freshman year at Daniel Murphy High School (during our last year in Hollywood, before the move north to suburbia) resulted in the discovery, in that school’s library, of Donald Attwater’s classic two-volume study, The Christian Churches of the East. Up to this point, my knowledge of these matters was all theoretical.

This changed in 1976, when I discovered St. Andrew’s Russian Catholic Church in El Segundo, Calif. Its pastor, Fr. Feodor Wilcock, S.J., came from an old Lancashire Recusant family. The last of his clan of gentry, Fr. Wilcock had answered the call of the Holy Father to enter the Russicum in 1922, when the supply of Russian Catholic priests ran out (thanks to Lenin’s agents). Sent to Russia with an American companion, he was speedily seized; as a British subject, he was expelled — his colleague vanished into the gulag, never to return. Fr. Wilcock was then sent to run a school and parish in Shanghai, China, among the Russian refugees. He was interned with his flock by the Japanese during World War II; he then fled with them after the fall of the city to the Chinese Communists in 1949; successively they went to the Philippines and Brazil. In 1956 he was transferred to New York, where he founded the John XXIII Russian Center at Fordham University. In 1971 he had come to St. Andrew’s to offer the Funeral Liturgy for its pastor; to his surprise, many of the parishioners were old members of his congregation from Shanghai. At their request he was reassigned, and remained there until his death in 1983.

This was the man who became my confessor after the incapacitation of James Francis Cardinal McIntyre, who had had that dubious honor up to that point. From Fr. Wilcock I learned firsthand the beauties of the Byzantine Rite; I also learned about the Episcopi Vagantes, but that is another story. At any rate, given the state of the Latin Rite, my visits to St. Andrew’s were stops at an oasis. In subsequent years, thanks to the cosmopolitan nature of southern California, I’ve been able to assist at Ruthenian, Ukrainian, Romanian, Melkite, Maronite, Syrian, Chaldean, Coptic, and Malankaran Catholic liturgies.

These experiences have left their trace on my prayer life: When I try to employ my five senses in meditating on the Blessed Sacrament, they come back vividly. Sight, of course, brings the elevation of the Host and pictures of the Holy Grail to mind; hearing evokes the strains of Panis Angelicus and Let All Mortal Flesh Keep Silence; smell conjures incense; and touch the feel of wooden pews. But taste will always be given over to the crouton-soaked-in-wine texture of Byzantine Communion.