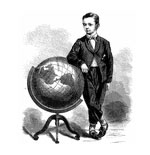 Looking Beyond Our Fragile Shelter

THE CASE FOR COLONIZING MARS

By Lewis M. Andrews | June 2022
Lewis M. Andrews is a former executive director of the Yankee Institute for Public Policy and author of Living Spiritually in the Material World (Fidelis Books, 2020). He is a longtime member of the Mars Society.

Ever since the last Apollo mission a half-century ago, the great debate among space-flight enthusiasts has been about what mankind’s next big off-world goal should be: build human settlements on the Moon or make the much longer leap to colonizing Mars. Until the past few years, the argument has been mostly academic, given the lack of funding to accomplish either. But with the growing number of countries having launch capabilities, recent advances in space-flight technology, an apparent market in space tourism, and, perhaps most importantly of all, the willingness of a few tech billionaires to gamble their fortunes on interplanetary travel, the question of “Moon or Mars?” has become a serious one.

The debate is, indeed, coming to a head as 2022 will likely witness critical tests for rival launch systems. This summer, NASA is scheduled to send its Orion space capsule on an unmanned mission around the Moon. And later this year, SpaceX will attempt to orbit its gigantic Starship rocket, theoretically capable of carrying men to Mars.

“Space is sexy again,” as astrophysicist Paul M. Sutter put it (Discovery, Jan. 16, 2020). “After the excitement of the initial Apollo missions dwindled into a subject only discussed by ultra-nerds, and the cool factor of the Space Shuttle gave way to the realization that it didn’t really do much, people generally lost interest in space.” But now that “we’re back at it again,” he asks, should the Moon or Mars “be our next major goal in human space exploration?”

In terms of the engineering challenges involved, the case for the Moon is the stronger one. If for no other reason than its very proximity to Earth — a few days vs. 18 months away — our planet’s only natural satellite would be cheaper to reach and safer to occupy.

All the World Is Staged

Most of us probably spend more time each day looking at screens than at anything, or anyone, else. Our thinking is curdled out of online scenarios.

Looking Beyond Our Fragile Shelter

Bringing down the price tag for colonizing Mars has made it a seeming solution to several social and even metaphysical concerns.