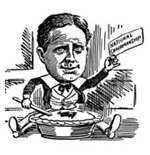 Losing the Good Portion: Why Men Are Alienated from Christianity

John Lyon has held teaching and administrative positions at several universities, including Notre Dame, Ball State, Kentucky State, and St. Mary’s (Minnesota). More recently, he taught literature and history at a classical academy in Wisconsin. He has also farmed, raising berries, flowers, vegetables, and apples, and operated a stall at the local farmer’s market in Bayfield County, Wisconsin.

When we were young and in parochial schools, we were often given as a reward for proper decorum or performance one or more so-called holy cards. These tended to be sappy and effeminate, and we stowed them into books or missals, generally face-down. They should have scared the wits out of us, but we had few wits out of which to be scared. We engaged lackadaisically in guerrilla warfare with these paper abominations which, though they metamorphosed over the years, remained offensive to something resembling the male psyche. Our mothers had them, our aunts had them, our sisters had them. They seemed to generate spontaneously, like mice out of abandoned soft goods in closet corners.

Decades later, out of the welter of items we shared upon our mother’s death, I came across what I remembered as her favorite depiction of Christ. Being less an iconoclast than an historian, I have preserved it against the ravages of time. In some sense, the depiction is itself ravishing, though I’d rather not dwell on this aspect. The best description I can come up with is that it puts one in mind of Rasputin on Ritalin.

Leon J. Podles’s Losing the Good Portion provides an encyclopedic array of attempts over the past thousand years by Christians of various sexual persuasions to address the canard that the creation of males in our species was a mistake — not a “divine mistake” but a mistake by the Divinity. In a species in which one is by default female, the unfortunate possessors of a Y chromosome are, it seems, endlessly involved in justifying their peculiar constitution and its behavioral oddities. (I have read, in a detailed scientific work, that in ten thousand years’ time, this misbegotten chromosome will disappear. Through sheer embarrassment, one wonders?) This justification of “natural” masculinity is and has been an almost insurmountable obstacle in Christianity, even though the Christ is worshiped as Son of God and Son of Man.

To parody the old saying, a woman is always a woman, but a good man is only a bloke.

Male aggressiveness lies at the heart of the matter, though one suspects that what’s problematic could also be called male assertiveness, possessiveness, striving to dominate: traits not unknown in women but — so far — less prevalent in that sex. Where Christianity in the West really got in over its mitred head, however, was with what Podles calls “Sacred Eroticism,” as exemplified in the thought of Origen, Tertullian, Gregory of Nyssa, and, much later, Bernard of Clairvaux.

Initially, the “bridal phenomenon” was patterned after the Old Testament corporate imagery in which Israel was the bride of the Lord. Likewise, Christian imagery is corporate: the Church is the Bride of Christ. Before long, though, Tertullian, Athanasius, and Ambrose allowed for individual Christian virgins to think of themselves as brides of Christ. From Origen’s Commentary on the Song of Songs to Bernard’s work of the same name a thousand years later, it became acceptable to call the soul that loves God a bride. “For the Fathers and Bernard,” Podles writes, “such bridal imagery was allegorical. But erotic language was highly congenial to women.” He then cites a late 20th-century work, From Virile Woman to WomanChrist, in which Barbara Newman observes that “women with a talent for sublimation need not even give up their eroticism. Beginning in the twelfth century and increasingly thereafter, the brides of Christ were not only allowed but encouraged to engage in a rich playing-out of their privileged relationship with God. Christ as a suffering, almost naked young man was an object of the devotion of holy women.”

The convoluted phenomenon of “courtly love” is not directly addressed in Podles’s text, but we get examples of “bridal fancy” from Hildegard of Bingen through Margaret Mary Alacoque to confessional manuals such as that in a Spanish catechism with prayers for adolescent girls preparing for communion. In the latter, published in 1944, the recipient is advised to prepare herself with thoughts such as “Your life encircles me, that it might absorb me, penetrate me, make me die,” and “Come, Jesus, drench me, penetrate me….”

When women are exposed to transmogrified eroticism as “brides of Christ,” it may be seen or experienced as some form of sexual-social completeness and thus sit well with the soul. When, however, men are told that this pattern should be theirs also (as with Bernard of Clairvaux, who refers to himself as a woman and advises his monks to think of themselves as “mothers” and let their bosoms “expand with milk, not swell with passion”), it is either a call to homoeroticism as a “mark” or simple nonsense. Perhaps one could be a eunuch for Christ; other religions seem to have accommodated such status in at least the indirect service of divinity. But the call to transform literal testosterone to figurative estrogen, well, this confusion of categories begets something transhuman: in Clairvaux, “Frankenmonks”?

Consider the latitude of acceptable male behavior in medieval society. Citing Jacques Rossiaud’s book Medieval Prostitution (1984), Podles casually notes that “clerical concubinage was almost universal.” This broad tolerance is, in some fashion, theoretically based on Aquinas’s justification of the existence of brothels as a means of “protecting honorable women from men,” which justification, in turn, is based on Augustine’s observation that “if you do away with harlots, the world will be convulsed with lust.” On a more practical than theoretical level, Podles observes that in towns such as Augsburg, Germany, which had large numbers of young, unmarried men on the loose, the town council provided a brothel, thus “enhancing the good, piety, and honor of the whole commune.” One doubts that the practice was passed off as “mysticism,” let alone sacred mysticism.

The pseudo-sublimation of “sacred eroticism” was hardly the only matter that alienated males from Christianity, though it may be the basic psychological factor behind this distancing. Podles deals with other related factors as well; for example, the easy access by a nominally celibate (though not castrated) clergyman to the wives and daughters of laymen via the confessional, sessions of spiritual guidance, and, one might add, macho sermonizing. One can see these forces of seduction at work today. I myself have seen a priest from a non-Western country so “electrify” a not insignificant female component of his Western congregation by preaching with moral vigor and its physiological counterpart that he required (but was not afforded) protection against them in the vestibule of the church after Mass. The sequel was unfortunate.

Again, those of us who came to maturity before Vatican II can recall a regime of rigor in the confessional that seems to have gone the way of the Latin Mass: You can find it if you search, but it does not simply come at you. Today’s practice fits at least the second part of Mark Twain’s description of a preacher’s sermon as “all hogwash and soul-butter.” Most of us have never had to endure the agon imposed on penitents by priests trained, for example, under the manuals of Tomás Sánchez (1550-1610). There came to be a Spanish seminarian’s adage that held, “If you want to know more than the devil does, read On Marriage by Sánchez.”

Sexual rivalry was not the only cause of anti-clericalism. Men tended to find some devotions, popular primarily with women, as simply disgusting. This seems to have been the case with devotions to the Sacred Heart, first popularized by Margaret Mary Alacoque in the 17th century and then flourishing at Paray-le-Monial well into the 20th century. As recorded in her Autobiography, on one occasion Christ has Margaret Mary press her lips to the wound in His Sacred Heart for two to three hours.

Political issues at least since the 18th century set off waves of anti-clericalism, such that religion tended to become something for women and children more so than ever before. This bracketing becomes exacerbated in our time by feminism and gender politics, as women succeed not only in driving more men from churches but more women as well.

The last two chapters of Podles’s book describe attempts to lessen the tension between masculinity and Christianity, indeed to positively align their trajectories, and to scope out the likely role of men in the future of the Church. A quotation from James E. Dittes’s Driven by Hope: Men and Meaning (1996) sums up much in few words: “We men are gripped with a passion to control because we are gripped with a passion to save.” Podles adds, “Because he is a man, he knows that life is full of sorrow and wants to protect those he loves from that sorrow. Every man is a soldier or a priest. He wants to bring salvation, ‘to save life from its sorrow by summoning the transcendent.’” Nevertheless, Podles concludes, “Men look almost anywhere but to Christianity for the transcendent for which they long.”

Losing the Good Portion ends with a series of “lessons which can be drawn from [its] survey of male alienation from the church,” and in a monitory fashion Podles adds, “these lessons now apply to women as well.” He advises:

(2) “The movements that reach men are mostly lay-led and lay governed.”

(3) “The clergy should treat men and women as responsible adults.”

(4) Everyday church life is too feminized and drives men away.

(6) “The hardest group to reach is completely unchurched young men,” as this group is dominated by “the energy that fuels anger, passion, and the desire for masculine honor. How to tap this energy for Christianity…is the key to reaching young men.”

(7) “Movements that have reached men have focused upon the person of Jesus Christ, not as bridegroom, but leader and friend.”

(8) Though existential loneliness is the human lot, men suffer from it particularly because of their drive to independence. “Men seek to overcome this loneliness in the comradeship of fraternal movements, of fascism, of communism, of terrorist groups, of gangs, of war. Such ways are deceiving and destructive. Men will not accept Christianity because it is socially useful, although in general Christians make good law-abiding, family-centered citizens.”

(9) “Men accept Christianity because it resonates with their deepest longings, both their desire to be truly masculine…and their longing for communion, not to be alone in an empty universe but to have a companion and friend in the adventure of life and in the adventure that begins after this life.”

As in his earlier works, The Church Impotent: The Feminization of Christianity (1999) and Sacrilege: Sexual Abuse in the Catholic Church (2008), Podles knows what he’s talking about.