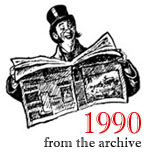 The abortion issue has now become a key part of the ongoing competition between liber­al Democrats and conservative Republicans. Liberal Democrats have laid claim to the prochoice position. By so doing, they have, without much forethought, accepted a position which is inconsistent with the principles to which they claim to adhere.

A political tradition is identified by its causes. Those of liberal Democrats include the New Deal, the War on Poverty, civil rights, opposition to the Vietnam War, women’s rights, opposition to nuclear weapons and capital punishment, consumer advocacy, and environmentalism. Liberal Democratic causes contain a common theme — respect for life. Liberal Democrats demanded decent health care so that people need not needlessly die. They demanded an end to capital punishment, respecting the life of the criminal. They called for increased aid to third world nations to prevent death by starvation and disease. They called for an end to war and the arms race so that lives would not be destroyed. They de­manded protection of the environment so that the life of all may be saved by saving the life of our planet.

Most political causes are against some­thing as much as they are for something. In this respect, liberal Democrats were not only for life, but also against what seemed a disre­spect for life by those on the “other side.” To them, conservative Republicans stood for the protection of the individual’s material well-being above all. Conservative Republicans fa­vored property rights over any form of social­ism, even if the latter better served the life needs of the poor. They favored lower taxes and greater profits over public health care. War, arms sales, and covert operations were quickly resorted to in order to protect American markets and the “American Way of Life” (partly a euphemism for a high standard of living). To liberal Democrats, conservative Re publicans represented the desire to protect at all costs the quality of life they felt they had earned.

The love of life over the quality of life. This is what liberal Democrats seemed to stand for, and that is why their prochoice po­sition is their great inconsistency. Prochoice is the conservative Republican policy of favoring the quality of life over life itself. It is the idea that a life, an unborn child, should be de­stroyed if the mother so chooses so that the quality of her life may not suffer.

Review of A Child's Book of Prayer in Art... The Duke and the Peasant: Life in the Middle Ages... Sister Wendy's Story of Christmas... Pieter Bruegel's Tower of Babel: The Builder with the Red Hat... Hello, Fruit Face: The Paintings of Giuseppe Arcimboldo

The narrator of the new translation —…

This Land is Not Our Land

Review of Confessions of a Parish Priest by Andrew Greeley, A Path From Rome by Anthony Kenny, and Catholic America by John Cogley