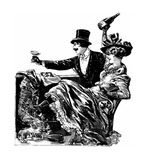 By Michael S. Rose | February 2008
Michael S. Rose is Web Editor and Book Review Editor of the NOR. His books include Goodbye, Good Men and Ugly as Sin.

Addressing the bishops of Switzerland in late 2006, Pope Benedict XVI recalled a remark by the German philosopher Friedrich Nietzsche that man can celebrate only if God does not exist. “That is absurd,” was the Pope’s response. The exact opposite is true, Benedict explained: “It’s only if God exists and touches us that there can be true festive celebration. And we know that these feasts of faith open people’s hearts wide.”

To those who scoff at faith and heckle Christianity, Pope Benedict’s words will no doubt seem a shade out of touch, unrealistically hopeful, and not a little pietistic. Yet, nothing could be further from the truth. Many today have no idea that the “feast” and the “festival,” with their correlating jubilant celebrations, are distinctly products of a Catholic culture. The case could even be made that merrymaking in the way of wine- and beer-drinking owes its origin to the Catholic monks who worked the land in Medieval Europe. They made wine. They brewed beer. Even in their ascetic lives, they made merry — at the times of year that were purposefully designated as times for merrymaking.

Feasting (merrymaking, partying — call it what you wilbpis an important part of Catholic life and rather unique among world religions. You won’t find Muslim or Calvinist writers penning odes to wine or spinning yarns about beer-drinking. Catholic writer Hilaire Belloc gave us, for example, his “Heroic Poem in Praise of Wine”:

To exalt, enthrone, establish and defend,
To welcome home mankind’s mysterious friend
Wine, true begetter of all arts that be;
Wine, privilege of the completely free;
Wine the recorder; wine the sagely strong;
Wine, bright avenger of sly-dealing wrong,
Awake, Ausonian Muse, and sing the
vineyard song!…
By thee do seers the inward light discern;
By thee the statue lives, the Gods return….
When the ephemeral vision’s lure is past
All, all, must face their Passion at the last….
So touch my dying lip: so bridge that deep:
So pledge my waking from the gift of sleep,
And, sacramental, raise me the Divine:
Strong brother in God and last companion, Wine.

For the great English Catholic writer G.K. Chesterton (who famously said, “No animal ever invented anything as bad as drunkenness — or so good as drink”), feasting meant beer and thick steaks followed by a good cigar. But partying is much more than letting the spirits flow. It’s also the pursuit of an authentically “good time” — as suggested by the famous Cajun saying that pervades French-Catholic Louisiana, Laissez les bon temps rouler: “Let the good times roll.”

Christians who accept Israeli Exceptionalism are making the same error as the Jewish leaders of Jesus' day made. The cure for such false notions is found in the Bible.

Catholicism in 1980s Estonia amounted to one shunned priest living in a closet; his flock numbered fewer than a half dozen souls.