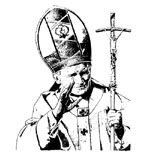 OUT OF POLAND HE WAS CALLED

Holiness. There was a palpable holiness around him. Though of course only the Church can declare someone a saint, there was no doubt that those chanting santo subito at his funeral had been touched by something unmistakable. Odd as it may seem, every morning, at dawn, when he prayed in his chapel in the Vatican, it was like watching Aslan the Lion at the kneeler, for Pope John Paul II used to groan in his praying as if he were wrestling with God. Holiness is an unusual thing, an unworldly thing. John Paul was joyful but not frivolous, serious but not somber. Deeply believing, and so pious, but his piety was never a barrier nor yet a shield from people. It was simply real, for he was simply in the presence of God and he knew it.

So it was the times I was blessed to be present at his private Masses in the Vatican, during the five years when I studied in Rome. Sometimes I was with a small group. Once, I was one of two priests at the altar with him. Those were the days when I would take breaks from my doctoral studies and travel into the Soviet Union to give retreats, or to visit and minister to the long-persecuted Catholics there. Our Lady of Fatima was my special patroness on those visits.

I will confess at the outset that I have always loved John Paul II, from the moment I became aware of his existence, on his elevation to the papacy over thirty years ago now. Of course, there was a deep connection because we were both children of the Polish nation and, like all believing Poles, were prone to feel that his election was in a way the setting to rights the great crime committed when, at the end of World War II, her allies betrayed Poland by handing her over to Stalin and the cultural genocide long prepared by the communists. Perhaps the most Roman Catholic nation in Europe was simply written out of Europe. Now justice had come from God — and from God alone. It was worth the wait.

Unlike others, however, I was never invited to share a meal with him after those early morning Masses, and we did not communicate. Rather, our encounters were limited to concelebration at such Masses and simple greetings in various reception lines in Rome. Still, I felt I knew him, and even knew him intimately. For one thing, he looked like my father, moved like him. For another, we would have known the same history, unwritten because banned by the commissars of the Soviet Empire and their willing collaborators in the Western academy. We knew that truth suffers, is crucified and buried in this world: but that truth will be victorious. Yes, I believe we knew each other.