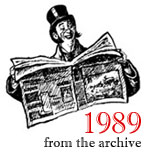 At the beginning of J.F. Powers’s 1962 novel Morte d’Urban, Father Urban sees a coarse business­man as a possible benefactor for his impoverished order, the Clementines. Urban diligently cultivates his friendship, and later entertains the fantasy that the Church ought not be too strict in her dealings with the rich and powerful:

He was up against a situation that had often confronted the Church, and one that had cost her heavily in lives and property. Father Urban had given a lot of thought to this particular aspect of ec­clesiastical history, which, generally speaking, suggested that it is too hard for some people, and all too easy for others, to do the right thing. Father Urban felt that Clement VII had been the wrong pope to deal with Henry VIII, and he wondered what the feeling was in heaven on this point.

A literary relative of Powers’s Father Urban is surely the Dean of Blangermont in George Bernanos’s masterpiece The Diary of a Country Priest, who believed it would be imprudent to judge too harshly the sharp business practices of the merchant class, the source of the French Church’s revenues and political support.

Powers’s Father Urban is an extroverted and energetic American priest (“an operator…a born operator”) who sprinkles his popular sermons with the idiom of American business: “[Charlemagne], you might say, owned and operated Europe.” He soothes a group of businessmen annoyed by a cam­paign, sponsored by Urban’s own superior, to “put Christ back into Christmas”: “As I see it, merchants — to mention only one group — are paying homage in the way best suited to them and their real tal­ents.” “Naught for your comfort” isn’t one of Ur­ban’s pastoral principles, not when he is minister­ing to the well-to-do and influential.

Father Urban also bears a certain literary re­semblance to the whiskey priest in Graham Greene’s The Power and the Glory, who, before the persecu­tions in his Mexican province, had nurtured eccles­iastical ambitions beyond his well-run and comfort­able parish. But Morte d’Urban is a comic novel, and it isn’t religious persecutions but an errant golf ball inexpertly driven by his bishop, whom Urban regards as one of his persecutors, that chastens Father Urban and transforms him at the novel’s end into, in Thomas Merton’s words, “a deeper, more noble and more spiritual” priest. Merton, in his review of Morte d’Urban, recognized that Pow­ers’s novel was not just a satire on the American Church and its clergy but also “a valid and pene­trating study of the psychology of a priest in what is essentially a spiritual conflict.”

“The Pardoner’s Tale.” By Geoffrey Chaucer.

Chaucer satirizes the hypocrite and the fraudster, especially he who uses his talents -- like preaching -- for his own gain.