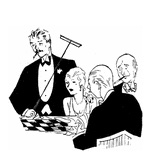 By James F. Csank | May 2009
James F. Csank is a retired attorney living in Seven Hills, Ohio. His writings have appeared in The St. Croix Review and The Human Life Review.

It began when a Christian group in Britain posted some advertisements on buses in London. These ads featured the URL of a website that said non-Christians would burn in Hell for all eternity. (The ads themselves did not refer to Hell.) Some atheists found this disturbing — not the convinced atheists, who are certain Hell and eternity don’t exist, but the not-quite-convinced atheists. These latter felt bad; they worried that some of their compatriots might become fearful, and thus felt compelled to donate to an organization that would finance the display of “a reassuring counter-advert.” Thus was born the Atheist Bus Campaign.

Noted atheist Richard Dawkins joined the effort, the British Humanist Association (BHA) got involved, and before you could say, “The fool hath said in his heart: There is no God,” over $200,000 was raised. So now buses in London and other cities throughout Great Britain carry the message: “There’s probably no God. Now stop worrying and enjoy your life.”

The word “probably” jumps out, doesn’t it? According to the woman who dreamed up the slogan, comedy writer Ariane Sherine (that’s O.K., she’s never heard of you either!), there were two reasons she used it: First, to “ensure that our ads will not breach any advertising codes.” (The campaign had been advised by the Committee of Advertising Practice that “the inclusion of the word ‘probably’ makes it less likely to cause offence….”) Second, to acknowledge that, while atheists believe the existence of God cannot be proven, some of them admit that neither can His non-existence be proven. Ariane, citing Dawkins, says that an honest atheist believes it is “almost certain” that God does not exist. But she changed Dawkins’s “almost certainly” to “probably” because “‘probably’ is shorter and catchier, which is helpful for advertising. I also think the word is more lighthearted, and somehow makes the message more positive.”

As for the rest of the slogan, according to the BHA: “Humanists believe that death is the end of our personal existence, that we have only one life and must make the most of it — as Robert Ingersoll, a nineteenth century American humanist said, ‘The time to be happy is now!'”

Why Are People Atheists?

Atheism is a recent and distinctively Western phenomenon; no other culture has manifested such a widespread public rejection of the divine.

Exploding the False Claims of the New Atheists