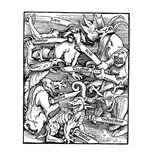 Interview with an American Exorcist

AN ANCIENT MINISTRY REVIVED FOR OUR TIMES

Monsignor Stephen Rossetti is the author of Diary of an American Exorcist: Demons, Possession, and the Modern-Day Battle against Ancient Evil [reviewed in June — Ed.]. A priest of the Diocese of Syracuse, he has been an exorcist for the Archdiocese of Washington, D.C., for over 12 years and has led hundreds of exorcism and deliverance sessions. He is also a licensed psychologist with over 30 years’ experience in treatment. Msgr. Rossetti is president and founder of the St. Michael Center for Spiritual Renewal, a nonprofit organization based in Washington, D.C., that conducts spiritual-education workshops for clergy, religious, and laity and prays with people who are suffering spiritually and in need of healing and deliverance. Msgr. Rossetti recently discussed his ministry with NOR contributing editor Christopher Beiting.

NOR: Monsignor, what is a typical “work week” like for an exorcist? How many exorcisms do you perform a day?

Rossetti: Our team has about 20-plus sessions a week. We get a few referrals daily.

NOR: In Scripture, Jesus tells the Apostles that some evil spirits “cannot be driven out except by prayer and fasting” (Mk. 9:29). Have you found this to be the case?

Rossetti: Our experience is that fasting and prayer do make sessions more effective. Thus, we have a group of “prayer warriors” who are asked to pray and fast at certain times, during difficult sessions.

NOR: Your writings refer to a number of “spiritual sensitives” on your team. Where do you find such people? Does this mean that you put credence in what people call “psychic powers”?

Rossetti: There are people who are specially gifted; the tradition of the Church shows this. For example, St. Padre Pio had a special charism for seeing demons and casting them out, as did St. Catherine of Siena. The Lord has been generous in providing people for our ministry. But this ministry requires considerable discernment, as many who think they have a special gift do not — it is all in their imagination.

The practice of abortion as a Satanic ritual is confirmed in a disturbing interview with a former leader of the Church of Satan.

Pope John XXIII through the Testimony of Silvio Cardinal Oddi

Popes John Paul II and John XXIII were canonized on April 27, 2014, the Feast…