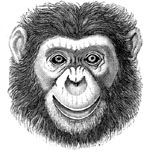 By Joshua Hren | January-February 2022
Joshua Hren is founder of Wiseblood Books and cofounder of the Master of Fine Arts in Creative Writing at the University of St. Thomas in Houston. He regularly publishes articles and poems in such journals as First Things, America, Public Discourse, The Hedgehog Review, and LOGOS. His books include the short-story collections This Our Exile (2018) and In the Wine Press (2020), a forthcoming novel Infinite Regress (2022), as well as Middle-earth and the Return of the Common Good: J.R.R. Tolkien and Political Philosophy (2018) and How to Read (and Write) Like a Catholic (2021). His first book of poems, Last Things, First Things, and Other Lost Causes, is forthcoming from Little Gidding Press.

Mom adopted the abandoned ape and named him A.I. without the slightest accent of irony — without a wry smile or an elbow nudge or even a whit of a wink. A.I. arrived in a Grecian robe, biting the nail of his opposable thumb like Sophocles or Socrates leaning against a Doric column, peering at me as if I were the dumb one.

He lived with us like a brother or a son or an estranged distant cousin of a different species for seven quietly desperate years, all the household being at peace. When A.I. started coughing, we thought he was laughing, given his good sense of humor and good will — so contrary to that first impression, when he seemed to put me in my place. Always he had us doubled over with some new prank at the end of a long day. But his long arms went limp, and we knew the end was now or near. Mom set up a hospice in my bedroom, and I took to sleeping on the lanky yellow couch, the one shoved out onto the sunporch because its pillows — let’s face it — lack any padding. Call it a penance for my perpetual jealousy of the godforsaken ape who won the affections of my fools’ gold parents, whose approval I’d never exactly secured in spite of successes that could make one blush.

(Inventions in plastics and nanotechnology, trademarked and patented, and adopted by the masses to the point they couldn’t conceive life without them — these futile devices that I alone invented without any fanfare or public parade, without all the stardom of Silicon Valley — because why? you ask — because I never could settle in conscience that I’d done something good for mankind.)

My parents, it turned out, could not enter the room of death. Along with the loss of their youngest son (something we don’t talk about in this house), over the prior year Dad’s bad prostate wreaked havoc on his mind, and Mom’s, and there was something too familiar in the ape’s bed-bound shape, the green-gray brushstrokes of ache across his face — the weary war paint all mortals wear.

I alone tended “brother” (for this is what we were bidden to call him, this blasphemy — this effigy — of familial connection). Nightly I cooled A.I.’s forehead with compresses, crooning ditties Gramma sang to me in infancy and kissing his hairless midnight cheek when nightmare tremors nearly cut short whatever small, animal nirvana this creature, my brother, had managed to salvage. Daily I exercised his stiffened limbs, stretching them out in a pep-talk Y until, tickled, he aped a carefree laugh, as if for my sake more than his. My brother. His eyes were like marbles dipped in molasses — a glassy sweetness that made you sadder than you’d ever been before — as if he’d spent a lifetime staring out at the sea and found the water’s infinity wanting.

One sullen Sunday, stadium sports not yet screaming from the tele, “brother” descended the stairs with a white sheet draped across his shoulders, a solemn purse to his pallid lips. His gait was not hale, but his posture was perfect — eerily erect. Suspect. He made much ado of his opposable thumb, as if discovering the thing for the first time, gesturing toward the forbidden door that boundaried Dad’s closet office. He wished to be alone with the word processor computer that Mom had bought for Dad’s birthday. She’d clipped coupons for four years before we could afford such a feat.

(I’d never shared with my folks my inventions, never disclosed to them that I was not really their own anymore but rather one of Francis Bacon’s children — one of the millions whose minds he has sired. It was easier to pretend I was another millennial still living with mommy because of — need I say it? — lost illusions. Because, really, they liked having me around, I could tell. And if I’d moved out, they’d be short on cash ’cause I paid half their bills with the spoils of my futile inventions, knowledge of which I’d spared them to keep their innocence intact.)

Typically, Mom guarded the computer like a helicopter mother surveilling her child. She didn’t want A.I. on the screen. (“Just think of who he could meet — anyone! Anyone could manipulate baby. He’s innocent as Adam.”)

Prior to living with us, brother had spent years doing the “unadopted” circuit, at which time he developed his delinquent habit of smoking butts found in gutters or even standard seed grass rolled in the black and white of freshly printed news. The exhaled smoke lent his nostrils a philosophical flare. While fostered, as part of an “Ape-to-Human” transiting initiative (sponsored by a senator who had really “found herself” in the years after she had adopted an ape), A.I. had taken state-funded night classes at Humane Veterinarian. Sure, since he’d started living with us, Mom let him keep in contact with old friends, half of whom now lived on the dole in the HV College dorms, but she limited his contact for fear that he’d run away — back to his brethren — and leave her all alone, nostalgically rolling her fertilized grass in the daily pages of The Wall Street Journal, pleading with me to come set the cig afire (she was nervous around matches and lighters and burners; her dad had died playing Prometheus in a traveling troupe of bohemian actors). “I can’t lose my baby,” she’d mutter, rummaging around for the bottle of pills that shredded like declassified worries between her grinding teeth.

Mom’s fears were groundless. “Brother” could barely be motivated to stay in touch with anyone at all. Watching him through the door crack, it was weirdly clear why this was the case: the stenotype he’d been using just couldn’t spell out his deepest feelings. And so, for the belittlement of humanity and out of a categorical duty to better the humble animal kingdom, I spent evenings doing nothing but teaching him how to play the keys damn well. One day, with his thin, deflated arms looking like popped inner tubes, and his poor cracked lips puckered like eight-day-old powdered donuts, “brother” asked for a little privacy.

How pleasant it was, in spite of his suffering, to hear through a hard wall such frenzied taps. I hated myself for helping the ape. I hated the pleasure his development gave me, like I was a god lifting this furry mute from stupidity.

Time passed. It has a way of doing so. Seconds seemed like moments. Moments seemed like hours. Hours seemed like days. Days seemed like years — as though infinity had become fleshy and slothful and altogether tangible. Tap tap tap. Pity me pops. Tap tap tap. Take a tip. Then a sound like the window pane cracked and shoved open. By the time I ran in, he’d made his bloodless exit. Hell. Cowards make consciences in us all. I couldn’t, of course, tell the family what had happened. Instead, with withered eyes that aped my brother’s, I announced the death of A.I.

As neither Mom nor Dad had high tolerance for funerals — they’d lost my little brother to a video-game tournament, a marathon of opposable thumbs — I put on my most reverend solemnity and gathered the survivors around an heirloom urn that happened to be old and Grecian. Carefully I’d arranged all the ashes of the ape’s cigarettes and funneled them into the godforsaken vessel, saying without saying that these were his ashes, providing for free a foreign chant I’d found in a Self-Help Funeral Manual: “Memento, homo, quia pulvis es, et in pulverem reverteris.” Then I held up the verses brother had typed, the words that came out after an infinity of tries, the lyrical genius that arrived by accident — I held it up like a new commandment and said, “He didn’t leave us orphans; he left us this poem to prove his love for us,” before belting the verses with a species of awe (for sublime were the verses and sad and still bonny), singing them thrice with a low-slung pang that sent our little family into a kind of karaoke:

Sigh no more, ladies, sigh no more.
Men were deceivers ever,
One foot in sea, and one on shore,
To one thing constant never.
Then sigh not so, but let them go,
And be you blithe and bonny,
Converting all your sounds of woe
Into hey nonny, nonny.

Maddened by the verses’ nonsense finale, Mom picked up the urn. Suddenly a mantic Sibyl, she walked in long stalks to our small living room. She approached the hearth with softest steps and elbowed away all Gram’s Precious Moments — the plaster angels that had lived there forever with tidings of a cozy and adipose afterlife. Like a libation bearer, she lifted the remains — as if the ashes were her own evolved heart: “The arrogance of homo sapiens has here at last come to an end.” I’d never heard her talk like that. Dad’s smile soured into petty jealousy — he’d been learning computer code for months with devotion and had just made a webpage for Mom for her birthday.

An insidious shadow shaped like an ape seemed to seep like a ghost from the cold dead urn. No one could mistake A.I.’s grave voice as he chimped out the notes with a sickly rasp. Smoking and smiling like an ingenious savant, he waltzed into the room with an open book, The Incomplete Works of William Shakespeare, his thumb shoved accusingly over the missing page — the verse I’d mistaken for A.I.’s creation. The cremation and all this humiliation were much ado about nothing at all. My brother had just gone out for a smoke.

I’ve cashed in my monies to purchase a zoo and a one-bedroom flat in a foreign city. I aim to keep animals as safe as possible from anthropomorphous activists, even if it means civil war has come to roost in my own so-called family of origin: I’m working with a lawyer to sue my former mother for appropriating an endangered ape and forcing upon this Rorschach shape cultural mores infinitely worse than the dictates of the most merciless colonialist — for when I tried to retract his studies and refused to teach him a comma of grammar, my good mother asked me, “Have you no conscience?”

With all the civility of a legal document, couched in a spiritless, prosaic language, I’ve accused her of compelling too-human consciousness upon a poor creature who was blissfully oblivious.

In its tiny crib, the baby cried and cried. Its wail passed through the wooden…

The scene: C.S. Lewis is sitting alone late at night at his big oak desk…