Volume > Issue > If God Is Love, Why Does He Command the Annihilation of Entire Peoples? 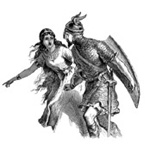 IS YAHWEH A BLOODTHIRSTY, GENOCIDAL MANIAC?

By David D. Jividen | June 2018
David D. Jividen, an Air Force veteran and perpetually professed member of the Fraternity of St. Dominic (a.k.a. Third Order), has a Master's in Moral Theology from Christendom College. He also has a Master's in Law from Harvard and a Doctorate of Law from the University of Cincinnati. A career military judge advocate, he served more than 20 years of active duty in a variety of legal positions, the last of which was as an attorney on the Joint Chiefs of Staff. Mr. Jividen has written on a wide variety of topics, including an article for the Encyclopedia of the Spanish-American and Philippine-American Wars on the "Role of the Vatican," as well as numerous legal articles. He currently works as an attorney for the federal government. The views and opinions expressed or implied in this article are those solely of the author and should not be construed as those of the Departments of Justice or Defense, any other agency or department of the U.S. government, or the Dominican Order.

Over the millennia, readers of Scripture have remarked that passages in the Old Testament portray God as ordering actions that could easily be labeled immoral, vicious, and inconsistent with the ethos of Jesus Christ, the New Testament’s human face of God, a God of Love and Mercy. This alleged discontinuity relies on biblical texts in which God orders herem, or the slaughter of humans and livestock, and the destruction of cities. On a casual reading, these dramatic passages can create, as C.S. Cowles has noted, a two-fold dichotomy between “the warrior God of Israel” and “the God of love incarnate in Jesus,” between, for example, God’s instructions in the Old Testament to “utterly destroy” the Canaanites and Jesus’ command in the New Testament to “love your enemies” (Show Them No Mercy: Four Views on God and Canaanite Genocide, 2003). In fact, one early heretic, Marcion, was excommunicated for advocating the removal of the Old Testament from the canon of Scripture because, to his mind, these texts portray a God inconsistent with the God of Love found in the New Testament.

Why is this important to today’s Christians? Simply put, we should be prepared to explain these herem passages since they not only continue to scandalize Christians but are fodder for resurrected Marcion-like attacks. According to notorious atheist Richard Dawkins, whose indictment of God draws from these herem passages, “The God of the Old Testament is arguably the most unpleasant character in all fiction [and is] proud of it: A petty, unjust, unforgiving control-freak, a vindictive, blood thirsty ethnic cleaner; a misogynistic, homophobic, racist, infanticidal, genocidal, filicidal, pestilential, megalomaniacal, sadomasochistic, capriciously malevolent bully” (The God Delusion, 2006).

These types of attacks are not going away soon, a fact underscored to me and my wife when we had the unfortunate experience of attending a performance of Arguing With God at the Hylton Performing Arts Center in Manassas, Virginia, in 2016. The production centered on the maniacal cruelty of the Old Testament God. We were appalled at the play’s unabashed, sophomoric “theology.” For those who’ve found themselves in similar situations, a review of the herem texts and similar New Testament passages, as well as the use of the proper scriptural interpretive methodology, is key to addressing and answering these types of virulent objections.

Which Church Is the Real 'Bible Church'?

The completeness of Catholic conformity to the biblical blueprint is nothing less than astounding.