Volume > Issue > How Literature Helps Us Grow in Virtue 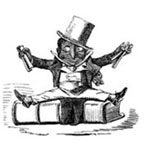 By David Arias | September 2017
David Arias is a husband, father of 12, and Professor of Philosophy at Our Lady of Guadalupe Seminary in Denton, Nebraska. Previously, he taught for over a decade at Thomas Aquinas College in Santa Paula, California.

For millennia the wise have recognized that amid all the various sorts of education a man may receive, there is one that is the most perfective. This education is commonly called liberal education, or the education proper to the free man. Bl. John Henry Newman describes it in these terms: “This process of training, by which the intellect, instead of being formed or sacrificed to some particular or accidental purpose, some specific trade or profession, or study or science, is disciplined for its own sake, for the perception of its own proper object, and for its own highest culture, is called liberal education.”

This kind of education must not be mistaken for an acquaintance with, or even a mastery of, the seven liberal arts that make up the trivium and quadrivium; these disciplines are but the beginning of the education proper to the free man. Indeed, as Hugh of St. Victor notes, the liberal arts are certain ways by which “the lively mind may enter into the secrets of philosophy.” On the natural level, the secreta philosophiae to which Hugh of St. Victor refers are found most of all in the sciences of metaphysics and natural philosophy, also known as first philosophy and second philosophy, respectively.

Since the Incarnation, however, liberal education has a crowning supernatural component that both illuminates and builds on the various sciences that the man who undertakes this education endeavors to acquire. I am referring to the science of Sacra Doctrina to which even first philosophy must bow as a maiden does before her queen. Indeed, just as all the treasures of wisdom and knowledge are hidden in Christ, as St. Paul tells us in Colossians 2:3, so all the secrets of philosophy are contained par excellence in Sacra Doctrina, which is the science proper to God and the blessed.

My purpose here is not to delve into the details of liberal education, or even Catholic liberal education as such. Rather, my aim is simply to share some thoughts about how literature stands to the sort of education I have very roughly sketched above. In doing so, I will enlist the aid of Plato, Aristotle, St. Albert the Great, and St. Thomas Aquinas.