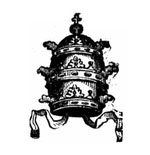 By Clara Sarrocco | November 2015
Clara Sarrocco is the longtime secretary of the New York C.S. Lewis Society and a graduate of Fordham University. Her articles and reviews have appeared in Touchstone, Saint Austin Review, Gilbert Magazine, The Chesterton Review, Catholic Historical Review, and The Fellowship of Catholic Scholars Quarterly. She has taught courses on C.S. Lewis at the Institute for Religious Studies at St. Joseph's Seminary in Dunwoodie, New York, and at the Seminary of the Immaculate Conception in Douglaston, New York. She was recently elected president of the Long Island Chapter of the University Faculty for Life.

High in the Apennine Mountains, with tiny villages perched among the rocks like eagles’ nests, rests L’Aquila. The founding of this Italian town, whose names translates to “The Eagle,” dates to around 1254. Its legends and lore were very much a part of my childhood, for it is where my family originated. A walk through its cobblestone streets is a walk from the remote past to the distant past and finally to the present. My memory is of fields of wild poppies and edelweiss, the soft lull of tinkling bells from the necks of grazing cows and sheep, and the buzz of bees flying from flower to flower in search of nectar.

Due to winter snows from the two highest peaks in the Apennines — the Gran Sasso and the Maiella — water is an abundant commodity. This explains why in the central piazza of L’Aquila there is a fountain with ninety-nine small spouts (Fontana delle Novantanove Cannelle), constructed in 1272, from which water flows nonstop. Some claim that it commemorates the number of ducal estates from that time. Another well-known landmark is the Luminous Fountain (Fontana Luminosa), a sculpture of two peasant women bearing large jugs spewing forth torrents of water. It was built in the 1930s and is artistically reminiscent of the fascist era.

Along with its elevated locale, plentiful water, and unspoiled natural beauty, this is earthquake country. L’Aquila is a university town, home to the University of Aquila, and in 2009 a powerful tremor struck the region, destroying the student dormitories and taking many young lives. Yet, despite the ever-present danger of earthquakes, the inhabitants developed many cultural institutions. They built a repertory theater, a symphonic orchestra, a fine-arts academy, a state conservatory, a film institute, and numerous ski resorts that dot the surrounding provinces.

The countryside is marked by many churches and chapels in various states of disrepair because most of them date from the early medieval period. They were established to provide respite for shepherds and pilgrims who traversed the rugged terrain. The remoteness of the area appealed to the Cistercian monks who sought silence and tranquility. Their summer respite of Santa Maria del Monte, dating to the thirteenth century, provided a haven of both spiritual relief and physical shelter for travelers.

What Does the Pope Know About World Affairs?

Where hot wars are concerned, many of Ratzinger's most ardent admirers find themselves diametrically at odds with the Pope.