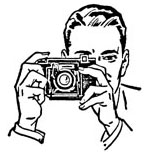 THEIR HISTORY AND ROLE IN THE PRO-LIFE MOVEMENT

The Nazi Holocaust ended nearly seventy years ago. Yet, despite the overwhelming evidence of the systematic extermination of European Jews, there are those who deny that these atrocities actually occurred. Much, if not all, of such denial is motivated by a politically or philosophically based anti-Semitism. In other words, refusal to acknowledge the Third Reich’s Final Solution is fueled by an ideology of hate, fear, and distrust of the Jews. One of the most persuasive rebuttals to Holocaust denial is the photographic record of its victims. This record, both still photos and film, was used to great effect by the prosecutors during the Nuremberg trials. Consider this quote from the website of the U.S. Holocaust Memorial Museum:

In addition to official photography and films produced at the behest of the Nazi state, German soldiers and police took numerous photographs and film footage of German operations against Jews and other civilians. They documented the public humiliation of Jews, their deportation, mass murder, and confinement in concentration camps. This became powerful visual evidence of Nazi war crimes submitted at Nuremberg.

Further visual documentation came from the U.S. Army Signal Corps, which, in the course of photographing and filming American operations in World War II, also played a crucial role in documenting evidence of Nazi atrocities and the Holocaust….

On November 29, 1945, the IMT prosecution introduced an hour-long film titled “The Nazi Concentration Camps.” When the lights came up in the Palace of Justice all assembled sat in silence. The human impact of this visual evidence was a turning point in the Nuremberg trial. It brought the Holocaust into the courtroom.

U.S. chief prosecutor Robert Jackson believed that “unless record was made…future generations would not believe how horrible the truth was.”