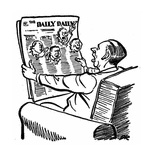 Funerals in the Free Market

We couldn’t resist the December 2002 issue of Harper’s, with its lead article right there on the cover, “The Case for Liberalism: A Defense of the Future Against the Past.” So how does one defend what hasn’t yet happened? Well, never mind. So who wrote the article? Why, good ole George McGovern, a relic of the past if ever there was one.

The article begins: “I believe in the essential decency and fairness of the American people.” That’s a debatable proposition, though maybe there’s something to be said for it. After all, the American people had the decency not to elect George McGovern their President in 1972.

The penultimate paragraph says this: “We need to restore calm and confidence to American society — including our airports and presidential press conferences. That…might even be good for the stock market. It was, after all,…the bold liberalism of Franklin Roosevelt that saved American capitalism after the disastrous collapse of the stock market in 1929.”

Well, yes, FDR did save capitalism, and the funeral directors and morticians of America can be glad he did. In the same issue of Harper’s, in the “Readings” section, there’s a list of “theme funerals” compiled by the National Funeral Directors and Morticians Association. Fifteen themes are listed. For example:

As newsrooms begin to resemble ghost towns, flotillas of amateurs are taking up the slack.

Neither East nor West: On the Pope's Radical New Encyclical