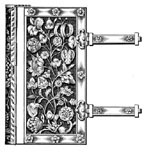 From Sola Scriptura to Social Chaos

BY THE WATERS OF BABYLON

St. Augustine, in his magnificent discourse “By the Waters of Babylon,” interprets Psalm 137 within the framework of his two metaphorical cities, Babylon and Jerusalem. St. Augustine had developed definitions of these two cities in his earlier work Expositions on the Book of Psalms. Babylon is the city of materialistic men: “All men that earthly things do mind, all men that do choose earthly felicity before God, all men that seek their own things, not the things which are of Jesus Christ, to that one city belong, which is called Babylon mystically, and which hath for the king the devil.” Conversely, Jerusalem is the city of men seeking God through Christ’s Church: “But all men who mind those things which are above, who on heavenly things do meditate, who with carefulness live in the world that they may not offend God, who are careful not to sin, who if sinning are not ashamed to confess, humble, mild, holy, just, godly, good, all these to that one City [Jerusalem] do belong, which for King hath Christ.” These cities will co-exist until the end of the ages: “For the former city was first born, the latter city was after born. For that began from Cain, this from Abel. These two Bodies, serving under two kings…are…meanwhile mingled, at the end to be severed; against each other mutually in conflict, the one for iniquity, the other for the truth.” These two cities will co-exist until Christ comes in His glory to “separate them one from another, as a shepherd divideth his sheep from the goats.”

In “By the Waters of Babylon,” St. Augustine continues this theme and explains how we in this age, though held captive physically in Babylon, can free ourselves from it spiritually:

Ye have heard and know that there are two cities, for the present outwardly mingled together, yet separated in heart, running together through the course of time until the end; one whose end is everlasting peace, and it is called Jerusalem; the other whose joy is peace in this world, and it is called Babylon. The meanings of these names too ye remember, that Jerusalem means “vision of peace”; Babylon, “confusion.” Jerusalem was held captive in Babylon…. But as regards men predestined to the glory of God…whom He has redeemed from this very captivity by His own Blood…this part…of the citizens of Jerusalem are held captive in Babylon on account of sin, but first begin to go forth from thence in spirit by confession of sin and love of righteousness, and then afterwards at the end of the world are to be separated in body also.

St. Augustine, who lived from A.D. 354 to 430, witnessed the tumultuous last days of the Roman Empire, weakened by its split into the Eastern and Western Empires in 395, and the sacking of Rome by the Visigoths in 410. These turbulent circumstances were a challenge to Christianity. As St. Augustine wrote, “So too the heathen generally ask us, ‘Explain the reason why Christ came, and what benefit Christ hath been to the human race. Have not matters been worse upon earth since Christ came, and was it not better then with men than it is now?'” St. Augustine realized the citizens of Babylon were really complaining that they could no longer indulge in their impure and wicked pleasures in abundance and safety as they had formerly done in the days of a stable Roman Empire. To them he answered that the good of Christ coming into the world was a tough love, such that wickedness would be destroyed “in order that that earthly desire being uprooted, the love of Jerusalem may be planted in.” The love of Jerusalem was indeed planted, and European Christendom grew and flourished for centuries, such that Western culture came to resemble Jerusalem more than Babylon.

A review of Why Priests?: A Failed Tradition

The Gnostic Temptation in the Catholic Church

Gnosticism is rife in American Christianity to­day. Philip Lee, in his Against the Protestant Gnostics,…