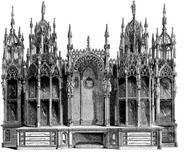 “I want to stay Catholic, but that evangelical church is so alive! The people are so open and friendly, you can just sense the Holy Spirit there!” Many a disaffected Catholic has voiced some variation of this assessment after a visit to an evangelical Protestant church. The unspoken contrast is with the dry, routinized liturgy and perfunctory commitment found in many Catholic parishes. At the core of this critique is the simple fact that evangelicals seem to genuinely care about visitors, while one can attend Mass for many weeks in a typical Catholic parish without being spoken to once. So — why aren’t Catholics friendlier?

Though many are tempted to ascribe these differences to a simple difference in the quality of the relationship with God enjoyed by members of evangelical churches, this drastically oversimplifies a situation with complex historical and cultural roots. When these roots are understood, Catholics may find themselves less impressed, and perhaps even a little shocked. Evangelical attitudes grow out of a set of ideas about the nature of the Church and the nature of a church service that are vastly different from Catholic teaching.

Very few American Catholics understand the extent to which the proliferation of denominations is viewed as a positive good by most evangelicals. To Catholics, the broken and divided state of Christianity is a scandal, a sign and consequence of sin. Division and schism have few negative connotations for evangelicals. They are regarded as providing freedom of choice, the equivalent of (to understate it) 31 flavors of ice cream. And just as there is no moral difference between mint chocolate chip and pralines ‘n’ cream, the difference between denominations is purely a matter of personal preference.

The potential church member is thus a consumer, free to seek a church in a vast religious marketplace. The consumer is looking for a church that will “meet his needs.” Churches must maintain an awareness of the market, for they are constantly competing for customers (known as “members”).

Letter to the Editor: November 1994

Horrifyingly Accurate... Oxford Slipping?... Christocentric or Anthropocentric?... Not At Any Price... Our Boys Fought for Gordon Zahn... Parades or Prayers?... What Would Be Worse?...

Many, many priests and bishops knew Theodore McCarrick was a serial molester and yet, somehow, McCarrick got the ultimate appointment to the Archdiocese of Washington D.C., and was elevated to the rank of cardinal.