Volume > Issue > For Mature Audiences Only 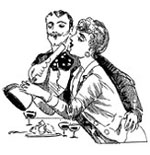 By Casey Chalk | April 2022
Casey Chalk, a Contributing Editor of the NOR, is a contributor to The American Conservative and The Federalist. He is the author of The Persecuted: True Stories of Courageous Christians Living Their Faith in Muslim Lands (Sophia Institute Press, 2021).

“Do you want to come upstairs?”

This short question is one of the most emblematic of the era of casual sex. It is itself a casual question, though it communicates something very serious: Are you interested in having sex with me right now?

I remember watching television as a young teenager and hearing that question. It sounded like something mature adults do: Go on dates, and if the date goes well, the woman invites the man up to her apartment.

As a somewhat sheltered teenager raised in an evangelical family, I had no clue what was entailed in going “upstairs” besides sex. Teenage boys aren’t inclined to think about the more complicated dynamics of engaging in the most intimate human act with someone they barely know: What happens if sex goes badly? What do you do afterward? Do you profess your love to this person? Do you stay the night? All that is beyond the immediate concerns of a hormonal adolescent.

What’s alarming is that so few adults seem to think about those questions either. We learned all about that through the #MeToo movement, which picked up steam in October 2017, when actress Alyssa Milano encouraged woman to use the hashtag on social media to share the extent of the sexual harassment and assaults they’ve experienced. It had a salutary effect as hundreds, if not thousands, of men have had their various misdeeds exposed to the public. The many #MeToo casualties include former U.S. Gymnastics doctor Larry Nassar, singer R. Kelly, TV news personality Matt Lauer, film producer Harvey Weinstein, and former New York Governor Andrew Cuomo, whose first accuser, Lindsey Boylan, was a high-school classmate of mine.

But the #MeToo movement wasn’t just about bringing down big names. It also provoked broader conversations about sex, including what qualifies as consent. And this, the inheritors of the sexual revolution found, is a thorny question. The result was a cacophony of risible conversations about the need to garner explicit consent not only before getting intimate but periodically throughout the encounter. This included the need for “safe words” regarding bedroom behavior that women (and, I suppose, men) find unacceptable or distasteful.

Our goal as Christian parents is to guide our children into the grace of God's love, that they might be with Him for all eternity.