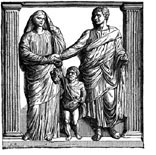 Father in Heaven & Fathers on Earth

The reservation of the priesthood to men is out of step with our contemporary culture stemming from the Enlightenment, for this culture wishes to obliterate difference. We believe in a rationalized sameness and in abstract rights belonging to individuals taken simply as individuals. Man is conceived of as self-sufficient, above any differences coming from his body, his society, and his past. Differences are suppressed or relativized.

Yet long ago Heraclitus noticed that harmony comes from what differs. Difference unites because every different is different from; we cannot know that “A” is not “B” without knowing “B,” and thus “A” and “B” are united in their presence together. The difference between male and female is such that neither one makes any sense without the implicit presence of the other in the same world.

God is our Father. When “father” is analyzed in the tissue of human experience, two aspects come to the fore: “father-of” and “father-of, with a mother.” But we must look closely at the “of” and the “with,” for they are different from the mother’s being “mother-of” and “mother-of, with a father.” The mother’s being mother-of involves a prolonged physical closeness with the child, which carries with it a psychological union and presence. This means that the mother introduces the child to the father as to one who comes from outside the closeness of the mother-child bond. The maternal bond is an already given presence; the father is one coming to be lovingly and protectively present from elsewhere. The “with” structure also differs between father and mother: The father originated the child with the mother, but without receiving from the mother, whereas the mother did receive from the father, so that if we were to disregard the receiving-from, mother as such would disappear (although to-produce would remain).

“Father” thus appears as uniquely suited to name both the Creator in relation to creation and the unoriginate divine Person who generates the second Person. In both origins, God produces without receiving from another. It would not make sense to name the Creator or the generating person “mother,” since the specific distinction of the mother is that she receives from another in producing another, whereas God by His power produces perfectly without receiving from another. Furthermore, as the human father must take some initiative in overcoming absence in order to become known to the child, so God as the Father of the Son reveals Himself out of hiddenness, for He is not known as Father through the creation; His fatherhood is communicated by His own infusing the gift of faith with the word of someone telling me what I had not heard of before: “faith comes by hearing and hearing by the word of Christ” (Rom. 10:17). The God who can be like a mother in merciful care must be named “Father” and “He,” for tender care presupposes the very being of the cared-for, a being produced by God not receiving from another.

The masculine imagery for God in divine Revelation builds up in believers a subliminal sense or “God” as “masculine.” This clashes with modern attempts to feminize or neuter “God.” This is not because traditional believers think that God is physically masculine, but rather because the masculine personality’s way of being in the world, which we know from social experience, differs essentially from the feminine. In and through these subliminal echoes of masculine personality in God-language, the masculine communicates who God is as Creator and Judge and Redeemer.

Briefly put, the masculine way of being in the world, by comparison with the feminine, involves a semiconscious sense laid down early in life of being different or separate from the surrounding space and persons. The male is psychologically held back in reserve from the people present in front of him and their emotions. By contrast, the feminine way of being in the world more easily takes on or merges with the emotions of the other people who are present. This is why — as contemporary society is once more beginning to understand — masculine presence is needed in the family for giving commands with a view to the common good.

One can see now why the masculine symbolizes God: God is the being who could be all that there is; subsisting necessarily in Himself without need of anything, He is not by nature in any sympathy or attunement with any world. Rather by free and contingent choice He creates a world history outside Himself to reflect the infinite immutable being and goodness which in perfect justice He loves. It is well known that religions of feminine divinity tend toward pantheism and nature-worship, insofar as the goddess gives birth to an emanation of herself and merges in sympathy with the other beings which are ultimately not other than she. By contrast, the God of the Old Testament has a presence to His creation in which immanence is nestled against the backdrop of ontological independence and justice. Only against the backdrop of paternal transcendence and justice can there be divine mercy and condescension. What is at stake in the contemporary Church — in today’s crisis of gender and God-language — is the very being-known of the true God.

Some individuals freely give themselves to evil. Notice that Our Lord did not exorcise Judas, nor did St. Peter exorcise Ananias, nor St. Paul Elymas.

We aspire to no exclusivist, triumphalist, inquisitorial, or truculent “Catholicism.” We will continue to be ecumenical in spirit and aspiration, a meeting ground for Christians.

Letter to the Editor: July-August 1989