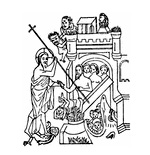 By Alice von Hildebrand | November 2008
Alice von Hildebrand, a Contributing Editor of the NOR, is Professor Emerita of Philosophy at Hunter College of the City University of New York. She is the author, most recently, of The Soul of a Lion (Ignatius Press; Preface by Joseph Cardinal Ratzinger), about her late husband, the Catholic philosopher Dietrich von Hildebrand; The Privilege of Being a Woman (Sapientia Press); and By Love Refined (Sophia Institute Press). She has written extensively for many Catholic periodicals and appears frequently on Mother Angelica's EWTN.

Jacques Maritain, probably the best-known Catholic philosopher of the 20th century, has written on a wide variety of topics: religion, theology, philosophy, politics, and society — even, early in his career, on science. In his last work, Unshackled Approaches, published the year of his death (1973), he offers a series of essays unrelated to one another. One of the essays is dedicated to eschatology, the theology of the end times.

In poetic, dream-like imagery, Maritain depicts Heaven as a landscape of “supernatural mountains,” covered with a dazzling snow, fresh but not cold, and more beautiful than any we know. After Dante’s definitive rendering (Paradiso), to sketch the beauty of Heaven is a daring undertaking, and Maritain wisely limits himself to one paragraph.

Maritain then takes us down into the valleys of Purgatory. There is still snow, but one perceives in Mari­tain’s depiction a note of grief, a grief wrapped in hope. One day, Purgatory will be no more: All the purified souls, having expiated their sins and been cleansed of the stains that sullied their wedding garments, are now worthy of seeing God face to face. We might call Purgatory the place of “holy cosmetics,” where all the flaws and blemishes of our sins are washed away by tears of love and contrition. Dante writes that its purpose is “to make fair” (belle) the souls of the dead (Purgatorio, Canto II).

Maritain tells us that the fire of Purgatory is very different from the one of Hell, which is a real fire. Hell is a place of horror, chaos, mud, hatred, darkness, despair, and desolation — a place of endless combat, a place where God is hated. Once again, every attempt to describe it pales when compared to Dante’s overwhelming masterpiece (Inferno).

"Wake Up! Jesus Is Coming!"