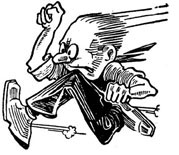 By Angus Sibley | June 2006
Angus Sibley, a Fellow of the Institute of Actuaries, and a former member of the London Stock Exchange, writes from Paris, France. His website is equilibrium-economicum.net.

The parable of Dives and Lazarus (Lk. 16:19-31) has puzzled and worried many an interpreter. It drew from St. Gregory the Great the wry comment that “here it is cleverly suggested that guests at a banquet can scarcely celebrate without blame.” But that could hardly have been the intention of He who provided such abundance of wine at Cana.

The strangest feature of this parable is that Abraham does not accuse Dives of any sin, or commend Lazarus for any merit. The text indicates that Dives was a man of greedy and extravagant habits who cared little about the poor; it tells us nothing about the character of Lazarus. Yet from what Abraham says about their conditions in the afterlife, they would seem to have been judged simply on the basis that one had a splendid time in this world and the other the opposite. The emphasis falls on their earthly circumstances.

This curious twist in the argument suggests that the main purpose of the parable is to ram home the message that exorbitant inequalities are, in themselves, offensive in the sight of God. But why blame an individual for a general social problem?

Jesus’ hearers belonged to a society that had a well-established system for alleviating poverty. They would doubtless have recognized in Dives the kind of person who is untroubled by glaring inequalities and unwilling to play his part in the task of mitigating them. He failed to help Lazarus, who presumably stayed only briefly at his gate because, according to the Vulgate, “no-one gave him anything.” But that, I would suggest, was just one example of Dives’s habitual disposition.

A New Testament for New Agers

Review of The Complete Gospels

The Church's teaching office is highly centralized, but her finances are highly decentralized -- making for a system prone to mismanagement and abuse.