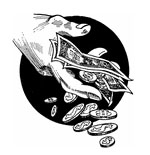 BEYOND REAGANOMICS AND CLINTONOMICS

By Thomas Storck | May 1993
Thomas Storck is a librarian in Washington, D.C., and the author of The Catholic Milieu.

It is said that the collapse of Communism has proven that our economic system is not only better than a command economy but the best there could ever be. Are our economic problems therefore only specks on an other­wise smooth surface? The answer depends mostly on what you think the purpose of economic activity is.

Americans take the economy as a given. Instead of trying to ascertain its real purpose — asking what it is meant to produce and what the relationship between economic activi­ty and the nature and good of man is — and then judging how well our economy measures up, we accept unemployment, labor strife, ex­tremes of wealth and poverty, unlivable cities, and mountains of garbage as inevitable byproducts of economic activity. We are told that the downturns in the business cycle are the unavoidable effect of market forces that, in the final analysis, work for our good. We know well that modern work, both because of the way ownership and control are structured and often because of the actual work itself, tends to the destruction of what is most human in mankind. We read of families and communi­ties destroyed by plant closings or bitter strikes. But seldom do we ask: Can we have any control over all this? Is the economy supposed to serve man? Or are we to twist ourselves and our families to fit the impersonal demands of the economic juggernaut?

As soon as one asks questions about the purpose of economic activity, it should be ob­vious that the economy exists for man’s sake, not the other way around. If the economy does not support our social, family, intellectu­al, and spiritual life, if it often works against what matters in human life, then we surely have the right to restructure it so that econom­ic activity is conducted, as much as our fallen nature allows, in support of mankind.

The one big argument employed by de­fenders of our economic system is that it de­livers the goods. What goods, to whom, and at what price are mostly not discussed. Of course, Marxism did not deliver the goods, certainly not at the level and quality we have become accustomed to. But if we look beyond the superficial glitter produced by our own economic system, we will perhaps wonder whether there is some alternative to both capi­talism and Communism that respects the na­ture of man in ways that neither capitalism nor Communism has done.

A Caricature of Charity

Christ’s earthly work, and ours, will be done when crosses are no longer needed for the salvation of men — when the poor are no longer with us.