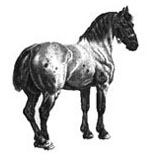 By Tom Bethell | March 2017
Tom Bethell, a Contributing Editor of the NOR, is the author, most recently, of Darwin's House of Cards: A Journalist's Odyssey Through the Darwin Debates (Discovery Institute Press, 2017).

My new book, Darwin’s House of Cards, has just been published by the Discovery Institute in Seattle. It is based on my lengthy research and interviews with several leading Darwinian advocates and critics. In it, I conclude that there is virtually no evidence for biological evolution — or, if you prefer, for “The Origin of Species by Means of Natural Selection,” to quote from the title page of Charles Darwin’s most famous book.

Darwinians often characterize evolution not as a theory but as a fact. Richard Dawkins, emeritus evolutionary biologist at Oxford University and perhaps the best-known defender of Darwinism today, has said just that on many occasions. “One thing all real scientists agree upon is the fact of evolution itself,” he wrote in Natural History magazine (Dec. 2005). “It is a fact that we are cousins of gorillas, kangaroos, starfish, and bacteria. Evolution is as much a fact as the heat of the sun.” Darwin’s claim to fame was the invention of the mechanism of evolution — natural selection. Darwinians believe that natural selection is the “engine” that drives evolution. In his book The Blind Watchmaker (1987), Dawkins wrote that natural selection is “blind, because it does not see ahead, does not plan consequences, [and] has no purpose in view.” He allowed that organisms “overwhelmingly impress us with the appearance of design, as if by a master watchmaker.” In short, natural selection creates “the illusion of design and planning.” It does the work once attributed to a Designer.

However, all organisms, not just humans, “appear” to be designed because they are, in fact, designed. They are the product of intelligent design because the design feature in any one organism is found in all. In the Darwinian view, natural selection explains how organisms transformed over millions of years from molecules to bacteria to humans without requiring any intervention from forces external to nature; in short, Darwinians argue, no intelligent design is needed. But natural selection gets us nowhere on its own.

Natural selection was summarized by the Victorian philosopher Herbert Spencer as “the survival of the fittest,” and Darwin incorporated this phrase into later editions of On the Origin of Species (1859). When Darwin’s great admirer Thomas Henry Huxley heard about Darwin’s argument, he said, “How extremely stupid not to have thought of that!”

Darwinism & the Culture of Death

Review of The Trademark of God by George L. Murphy, Philosophy of Science by Del Ratzsch, and Cross-currents by Colin A. Russell

A review of The New Geocentrists