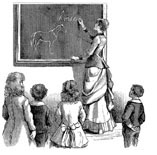 More than a few jokes have been made at the expense of beauty queens who say that they want to promote “world peace.” The sentiment itself isn’t amusing: World peace would probably be a nice thing to have. The amusement stems, rather, from the seeming impracticality of the idea. World peace has never been achieved, it won’t be achieved until the coming of the Kingdom of God, and there’s not much that beauty queens can do about it.

Still, in a sense, every person has the capacity to change the world. Every person contributes to the sum total of happiness, contentment, and disappointment that is felt in the world. People usually have no idea what the long-term or final consequences of their actions and words will be, but people can do things that make it more likely that they will make something worthwhile of their lives, not only for themselves but for others and for the Christian community. One aim of Christian education is to help young people understand that what they do and say really matters.

Of course, a few people — e.g., the Secretary General of the United Nations, the American Secretary of State — operate at a global level. And while it may be good to think globally (if that’s really possible), most of us are limited to acting locally. And even those who do operate on the international scene aren’t immune from the mundane realities of human life. So another aim of education is to temper grandiosity and self-serving ambition.

I would guess that, more than any other city in the U.S., Washington, D.C., is inhabited by ambitious people who want to do good for “the world,” and yet it is also a city racked by cunning, conniving, destructive power-politicking, and back stabbing. The city seems to be full of people who love humanity in general but can’t stand people in particular. This reminds us that another aim of education is to help students think abstractly, but only, in the end, for the sake of acting rightly and living well. There’s nothing commendable about a person who learns a lot and is yet “never able to come to the knowledge of the truth” (2 Tim. 3:7).

Time and again the Scriptures present images of the Christian’s paradoxical position in the world. How can people be “wise as serpents and harmless as doves” (Mt. 10:16; italics added)? How is it possible to simultaneously “honor the king” (1 Pet. 2:17) and maintain one’s Christian identity on this earth as a “stranger” and “pilgrim” (1 Pet. 2:11)? One reason that Christians have never finally figured out what it means to be in the world but not of it is that a person’s responses to events will vary depending on circumstances, and historical circumstances are never exactly the same for all people across time. Each generation of Christians in every place will need to determine for itself what it means, given its circumstances and options, to be both engaged in and spiritually distanced from “the world.”

The German Church has launched a program of reforms with elements that, if approved by the bishops’ conference, would contradict longstanding Catholic teaching.

When We Visit Jesus in Prison: A Guide for Catholic Ministry