Volume > Issue > Call the Police, It's an Academic Lecture! 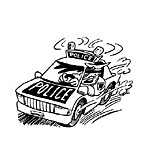 By Randall B. Smith | January-February 2011
Randall B. Smith is an associate professor in the Department of Theology at the University of St. Thomas in Houston. He is currently at work on a book on Pope Benedict XVI's encyclical Caritas in Veritate and is editor of the web magazine catholicismandculture.com.

I had just parked my car and was walking toward the lecture hall when I heard the siren, a short blast from a Notre Dame campus-security vehicle moving traffic out of his way. At first I thought he was merely pulling over a speeder on a nearby road, but then I saw him pull into the driveway in front of the lecture hall toward which I was walking. Parking right behind another security vehicle already on the scene, the officer hustled out of his car and into the building. “Oh, of course,” I suddenly realized. “Someone’s talking about the Catholic Church’s teaching on homosexuality.” And that usually means a public demonstration and attempts to disrupt the lecture. Sure enough, fifteen demonstrators had gathered inside the lecture hall, right outside the doors of the auditorium, to read “queer poetry” in protest of a lecture by a young woman named Melinda Selmys. Selmys, as it turns out, had self-identified as a lesbian for many years, but later converted to Catholicism — a conversion that at first caused her to resolve that she must forever live a life of celibacy. But some years later, she met and fell in love with a man, married, and now has five children. You can see the problem. Selmys’s experience has become a threat to other people’s identity.

By the time I had gotten inside the auditorium, the protest had disbanded. Selmys’s husband and some of the conference organizers had invited the protesters inside to hear the lecture. The situation inside the auditorium remained tense, however, and Selmys was visibly nervous. So much so, in fact, that she largely set aside her prepared comments in order to address the concerns of the protesters, saying that she was not there to demonize anyone. She seemed anxious both to hold fast to the teachings of the Catholic Church and not alienate members of the “gay and lesbian community.” She mentioned several times that her comments were drawn largely from her own experiences and that her experiences would not necessarily be the same as anyone else’s.

When the time for questions came, however, the room was still identifiably tense. In spite of repeated appeals that questions be kept short so that a maximum number of people would be allowed to participate, the first questioner spent nearly five minutes lecturing Selmys on how she was “demeaning” those with a gay identity by “privileging” her Catholic identity. After hearing Selmys’s response, the questioner immediately launched into a long follow-up question, and then another, and another, and another, basically dominating the first fifteen minutes of the scheduled twenty-five-minute discussion period. She would not voluntarily relinquish the floor until general crowd disapproval and an intervention from the chair forced her to do so. The lecture hall was now even tenser than before.

The second question was fortunately brief and to the point, but it too came from one of the protestors: “Aren’t you asking me to give up my gay identity in order to embrace my Catholic identity? Why should I have to choose between the two?” After a brief reply, the third and final question came from another of the protestors: “Should homosexuality be added to this university’s non-discrimination clause, and if not, why not?” This was another blessedly brief question, but as Selmys pointed out, she wasn’t a representative of the university and thus knew nothing about its internal political debates.

Whatever Happened to Apologetics?

Review of Handbook of Christian Apologetics

God put us in the world to know, to love, and to serve Him, and…

Letters to the Editor: December 1986