Volume > Issue > "But You Are Not My Friend" 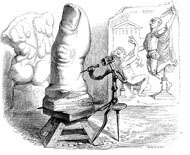 “But You Are Not My Friend”

I met him on an airplane, Detroit to Los Angeles. He was a pleasant change after my silent seatmate from Paris. Director of international students at a major Midwestern state university with a long interest in intercultural relations, Bill told me.

Glad to meet you, I said. I have an international bent myself — undergraduate degree in international affairs, international travel a routine part of my job, an Indian wife, and service with my city’s Intercultural Advisory Committee.

We got to talking about the world’s problems, the way people do, and before long my companion discovered my discomfort with the individualism prevalent in America today. “What would you prefer?” he asked. I said I’d prefer something somewhat more communitarian, using a word that undoubtedly has many meanings and nuances.

Bill probed further. I replied that my wife’s relatives in Bombay are an extended family in some of the best senses of the term, caring for — and drawing on the emotional resources of — a widespread and diverse group to make all their lives better. “But can’t that be stifling?” It can be, I replied, but it doesn’t have to be.

The stewardess brought my companion another glass of ice water, which he downed with a clinking of cubes. “This reminds me of a conversation I had with one of our African students,” he recalled. “Sam was an engineering student from a village in Nigeria, and I got to know him pretty well over the course of several quarters last year.” Bill fingered the button that lifted a footrest into place.

“I first met Sam through one of our academic counselors when he was exploring the ins and outs of transferring some credits from a British college,” Bill said. “And he often participated in planning the various social events we host for our international students. We even had Sam to the house for dinner a couple of times. So I really felt I knew him as a person, not just as a student who was one of my responsibilities.”

“Another ice water?” the stewardess asked. “Why not?” he smiled. I passed.

“So what happened?” I prompted.

Recently, within a span of 30 days, the Catholic Church in the United states lost two of her most prominent and respected thinkers.

Given the current outcry that Christianity is unfair to women, how odd that they are its most devoted followers.