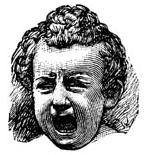 By Andrew M. Seddon | January-February 2013
Andrew M. Seddon, a native of England, writes both fiction and nonfiction, with over one hundred publication credits, including three novels: Red Planet Rising, Imperial Legions, and Iron Scepter. He contributed a chapter to Staying Fit After Forty by Don Otis, co-authored the devotional Walking With the Celtic Saints, and is a current member of the Authors' Guild. Dr. Seddon is a family-practice physician in the Same­Day Care department at Billings Clinic in Billings, Montana.

During the days when the Romans ruled the known world, the survival of a newborn child was Dad’s decision. The midwife would lay the newborn baby on the ground; if the paterfamilias picked him up, everyone breathed a sigh of relief — the father had “taken” the child, recognizing the newborn as his own. If he declined to raise up the newborn, the child was removed and exposed outside the house or in a public place. He could be claimed by anyone who wanted him — if not, he died.

The rich might expose a child so as not to invalidate a pre-existing will or have to divvy up their estate between numerous children. The middle class preferred to concentrate their attention and resources on a smaller number of children so as to be able to increase their chances for advancement in the world. And the poor were simply unable to feed their offspring.

Ironically, though, while the rich were happy to be rid of an unwanted child, the poor hoped for a better life for theirs, and sometimes an exposure would be faked, the mother secretly giving the newborn to neighbors or another family to raise and keep as a slave, perhaps in the future setting him free. Rarely, such a child might be incredibly fortunate and achieve high status — such as the girl who grew up to become the wife of Emperor Vespasian.

But the sad reality was that few exposed children survived.

Malformed infants were exposed or drowned: “What is good must be set apart from what is good for nothing,” were the Stoic philosopher Seneca’s words. Illegitimate children of wayward daughters were unwanted. A man who suspected his wife of adultery would expose the child she bore. A child might be exposed to make a political or religious statement. And the children of slaves could be killed.

And it was all perfectly legal and accepted.

Infertility & the Illusion of Control

Our life, and each life, is really God’s and no one else’s, and must be treated as such. Life is not something we earn or something owed to us, it is purely a gift.

She wanted to fly in and meet. At the airport, he was disappointed by how she looked in person. But by that stage in his life, he didn’t think he could do better.