Volume > Issue > Swords About the Cross

Swords About the Cross 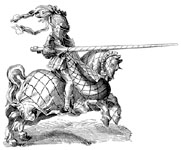 The Pope's Legion: The Multinational Fighting Force that Defended the Vatican

By Charles A. Coulombe

“There is a certain romance to most lost causes,” writes Charles Cou­­lombe in The Pope’s Legion, his history of the Papal Zouaves, a multinational military force formed to defend the Papal States and the papacy in the nineteenth century, whose history and existence have been all but forgotten. Coulombe’s monograph is the first English-language treatment of this subject in over a century, and would have been valuable in its own right for resurrecting a piece of lost history. But Coulombe, an author, editor, and compiler of an assortment of works ranging from ghost stories to histories of alcohol, has not written a dispassionate academic monograph. Rather, his history of the Zou­aves is written with the same spirit that proud Southerners infused into their histories of the War Between the States: a mixture of pride, gallantry, and quixotic appreciation for a lost cause. This is perhaps unsurprising, insofar as the Zouaves were at their most active during the decade that witnessed the American Civil War.

When one imagines the pa­pacy’s military forces, one inevitably conjures up images of the Vati­can’s Swiss Guards. Pressed to think beyond them, some might imagine the crusaders and warrior monks of the Middle Ages. Cou­lombe’s work is an attempt to move readers out of both the contemporary and medieval conceptions of the Church, reminding them that, as late as the First Vatican Council, the papacy actually had an active military force fighting to defend it. The story of how this force came together occupies the first portion of this book.

Coulombe is on his game when establishing the reasons for the existence of the Zouaves. While most textbooks treat the nationalism of the nineteenth century and the unifications of both Germany and Italy in a positive light, Coulombe reminds the reader that these matters were perceived much differently by members of the Catholic Church. After all, it was the Church’s position, privileges, and property that were considered fair game for plunder by the sort of High-Minded Individuals in pursuit of Noble Aims who have been plaguing the world since at least the eighteenth century. Matters were more significant in the Italy of the nineteenth century, when the papacy still had title to the Papal States, those territories in central Italy that had been under papal control since the Carolingian era, and whose existence provided the papacy with a prime source of the revenue it needed to conduct the business of running the Catholic Church. The Italian nationalists knew they could not create a nation out of Italy without including the Papal States, and Coulombe does a good job describing the personalities and motivations of the various political figures involved in this struggle, ranging from Cavour, Garibaldi, and Victor Em­manuel to Franz Josef, Napoleon III, and Pius IX. Himself a figure of controversy even in his own day, Pius IX — “Pio Nonno,” beatified by John Paul II in 2000 — was both unable and unwilling to resort entirely to military force. Neither, however, did he disdain it — it was in response to his cry for swords about the cross that the Papal Zouaves came into being.

The name “Zouave” is Franco-Arabic in origin. Their uniforms and many of the other trappings of this force were copied largely from French armies in North Africa — a fearsome fighting force in their day. The men making up the Zouaves came mainly from France, but they truly were an international force, drawing volunteers from Belgium, Canada, Ireland, England, America, Spain, Prussia, and a number of other places. Zouaves were expected to be Catholic in religion (one could not join without a letter of reference from his pastor), as well as Catholic in conduct (observers noted how the Zouaves were more often to be found in churches than in taverns). Nevertheless, esprit de corps and morale were unusually high a­mong the Zouaves, and they repeatedly demonstrated initiative, tenacity, and ferocity that put to shame larger and better-equipped forces — and all the forces they faced were larger and better equipped.

Coulombe’s book concerns itself with two major military campaigns: the Zouaves’ brilliant but failed defense of Castelfidario in 1860, which made their reputation, and their equally brilliant, and equally unsuccessful, defense of the Vatican and the Papal States in the shadow of the First Vatican Council and the last days of the Italian Risor­gimento in 1870. The Papal Zouaves were disbanded after that, but Cou­lombe traces the fates of a few scattered groups of Zouaves as they fought alongside the militaries of their home nations.

While overall a fascinating work, The Pope’s Legion does suffer a few flaws. The book is a military history and presents military engagements in some detail, a feature that might not appeal to all readers. A more significant flaw, particularly in light of this focus, is the lack of maps in the book, which makes the military action difficult to follow at times. Given the fact that there are illustrations in the work, and some appendices detailing burial sites and battle songs of the Zouaves, this omission is curious. Furthermore, to his credit, Coulombe tries to be fair to the multinational nature of the Zouaves and is evenhanded in his descriptions of the people involved, which has the unfortunate downside of making it difficult to keep track of what is happening to whom at certain points.

Despite these flaws, The Pope’s Legion has many virtues that more than make up for its shortcomings — not the least of these is that the book exists at all! We are long since past the days of romanticizing warfare and soldiering, and most of our contemporaries no longer even understand, let alone share, the standards of honor and chivalry that were commonly expected from military officers as late as the 1860s. Furthermore, the very notion of taking up arms in the service of religion is virtually incomprehensible to the modern mind. When considered at all, it is more often associated with Islam than Christianity. Finally, the very subject of this book is by nature contrarian. The modern age worships success, and the notion of fighting for a noble, though doomed, cause is foreign to us. As noted above, the closest analogy Americans could understand is that of a proud Southerner writing about the War Between the States and considering the Confederacy with sympathy rather than condescending scorn. Those who can understand this mindset will be able to appreciate The Pope’s Legion. Indeed, the actions and even the very existence of the Zouaves are something that many people, inside as well as outside the Church, would like to sweep under the carpet with some embarrassment.

In their last campaign, the Zouaves did what their Pope asked them to do. They were prepared to go down fighting to the last man in defense of their beloved pontiff, but Pius IX had other ideas. A man of peace who appreciated the occasional need for force, Pius IX wanted his defenders only to prove a point: to let the world know that the last actions of the Risorgimento were, in papal eyes, colossal acts of violence and theft, imposed by force and thus illegitimate. When Pius believed he had made that point clearly enough, he ordered his defenders to lay down their weapons and stand down to avoid further loss of life. The Zouaves were disbanded, and Pius IX and his successors became “prisoners of the Vatican” for decades, at least until matters were settled with Mussolini in the 1920s. And so the Papal Zou­aves passed into history and obscurity, forgotten by nearly all.

The Pope’s Legion is written with an ebullience and counter-revolutionary sympathy that is distinctly counter-cultural these days. Indeed, its tone throughout displays a pugnacity and concern for chivalry that is posi­tively chesterbellocian. The reader’s reception of this work will depend on his sympathy to these sentiments, which are certainly not contemporary ones but are doubtless more prevalent among NOR readers than the general populace.

The Pope’s Legion concludes on a very intriguing point as Cou­lombe meditates on how much the pontificate of Benedict XVI has been marked by his willingness to take unpopular stands in defense of traditional Catholicism. In an era in which the major powers are waging a war in the name of religion, however much they refuse to admit it or strive to deny it, Coulombe is daring enough to ask a couple of questions. In an age of military technocracy and barbarity, is it worth resurrecting a warrior ideal based on Christian chivalry, like that which animated the Papal Zouaves, as a way of humanizing warfare? More challengingly, is it possible that, despite her desire for peace, the Church may again need “swords about the cross” and the services of defenders like the Zouaves in her future, as she has so often in her past? These are hard questions, but fascinating ones, and time will tell how Benedict and his successors will respond to them.

The Founding Father of the Christian Tradition Concerning Islam

St. John of Damascus wrote two brief yet remarkable treatises against Islam, and he can be called first apologist to the Muslims.