Volume > Issue > How Not to Be Ecumenical 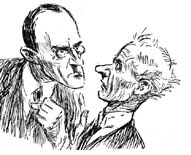 The Panther and the Hind: A Theological History of Angli­canism

Brian Barbour, who recently re­turned from doing sabbatical re­search at Cambridge University, is Professor of English at Providence College in Rhode Island.

The contents of this timely book are well conveyed by its sub­title. In nine compact chapters, Fr. Aidan Nichols, an English Do­minican, presents the main lines of Anglican development from the 1530s to the present. Scholars will be familiar with this material, but the author has a different audience in mind: the Catholic layman who wishes to know how and why Anglicanism arose, what is dis­tinctive about it, how it developed, why it has its current form, and what the prospects for reunion with Rome are. So successful is he in this endeavor that it is to be hoped that an American publisher will be quickly found.

“Anglicanism,” the via media between Protestantism and Rome, was invented by Richard Hooker in the 1590s. He gave it intellectual justification and estab­lished the basis for its apologetics. But he was writing long after the fact, for the English Reformation had occurred in the 1530s and was not an ecclesiastical but a politi­cal act: It was the state that made the Reformation. A new religion, Ecclesia Anglicana, was imposed from above for economic and po­litical reasons. But King Henry VIII and his associates were often working at cross purposes. British Catholicism was mixed with four elements — Wycliffite, Erastian, Lutheran, Calvinist — and the re­sult was fractious. While Henry lived, it was power that mattered and state power held this melange together. His successors, differ­ently placed, had to practice com­promise, as each element sought to dominate the others. During the reign of the boy king Edward VI, Cranmer veered first in a strongly Lutheran, then in a Cal­vinist, direction. Elizabeth might have settled for what her father had, but she lacked his power, and the fractious elements had to be held in check. The Elizabethan Settlement was a compromise between the parties and was intended to put an end to all dis­cussion. But, despite Hooker’s brilliant efforts, it failed to do so, and the Civil War of the 17th cen­tury was one terrible, perhaps in­evitable, result. The present anomaly of an established church in a secular, indifferent society was yet to come.

If this is familiar to scholars, Nichols’s argument may not be. For he contends that the success of the Tudor compromises was deadly. “Anglicanism,” he says, “testifies to the wisdom of Tudor government in the latter part of the 16th century. It does not tes­tify to the ‘wisdom which is from above’ of which the Bible speaks.” The subsequent history of Anglicanism is the story of each faction trying to achieve its own end, each attempting to keep the others from imposing their iden­tity on the church, and all held at arm’s length from one another by an ongoing series of political ar­rangements. Not surprisingly, there grew up from within the notion that disparate elements of Christianity, no matter how con­tradictory, could be brought to­gether. It was this “comprehen­siveness,” not truth, that came to be prized. But behind it lay only incoherence. That this was inher­ent in the project and not a later development is suggested by the apposite quotations from Dryden’s The Hind and the Pan­ther (1687), with which each chap­ter begins. Three hundred years ago the poet saw the situation with radical clarity: Compromise can yield comprehensiveness, but what it usually costs is truth.

From the first, Anglicanism suffered a crisis of authority. That crisis has persisted and is the deeper issue behind the present conflict over the attempted ordi­nation of women. Cranmer served his master. Religious authority re­sided in the king’s pleasure. In an Erastian church, authority resides with political power — which to­day means the church ac­commodates the times. Graham Leonard, retired Bishop of Lon­don, has described the situation thus: “Nowadays aberrant inter­pretations of Scripture pass unchallenged….” So, what we find in Anglicanism is an Erastian church, composed of competing factions, with an inherent, press­ing crisis of authority.

Ordination of women divides the house today. But this book is timely in another way. Many people take the superficial view that Anglican compre­hensiveness provides a desirable model for the church as a whole. For Nichols this is a disastrous misconception. “If one regards Anglican pluralism as a euphemism for the self-contradictions of a national church, brought into existence for political ends and preserved as a unity by historical nostalgia, one may feel that Anglicanism is a model of how not to be ecumenical.” Many think that Anglican-Catholic ecumeni­cal discussions are likely to lead the way to reunion. But it isn’t go­ing to happen. When American Catholics think of Anglicanism, they are usually thinking of the High Church and T.S. Eliot. What Nichols shows is that there is no “Anglican Church.” Anglicanism is really an unstable federation of competing factions — High, Low, Broad — each with its own out­look and agenda.

Nichols’s book brings historical understanding and intellectual pleasure, but its story is one every Catholic ought to find distressing. Sed gratia Dei. Yet de­spite the tragedy of its history, Anglicanism retains a great deal of “mere Christianity” and it contin­ues its local successes: Outstand­ing minds are nourished by it (like E.L. Mascall, to whom this book is dedicated) and good men and women come to holiness of life through its offices. God writes straight with crooked lines.

Nonetheless, we need to reflect on what can happen when we cease to think of the church as the worldwide Body of Christ, as the corporate reality of the Incar­nation continuing in time, and begin to think of it as an institu­tion or (God forbid!) a power structure, something we can ap­propriate and direct for our own ends. American Catholics should take note.

Hopes for the full evangelization of Anglicans were dashed by a statement issued by, of all people, the Catholic bishops of England.

Same-sex marriage is causing deep and possibly irreparable division in the Anglican Communion, the third-largest Christian communion in the world.

Since all that was valid about the “Reformation protest” has been accepted by the Church, it is time for Protestants to “come home.”