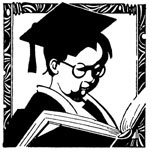 John Senior and the Restoration of Realism

Readers of the NOR may need little introduction to the famed Pearson Integrated Humanities Program (IHP) at the University of Kansas, an idiosyncratic two-year undergraduate program that ran from 1970 to 1979. Created by a trio of talented professors — John Senior, Dennis Quinn, and Frank Nelick — IHP was lightning in a bottle, a countercultural program that stressed the ideals of truth, beauty, and realism during the thick of the Decade That Taste Forgot. Although centered in a secular state university, and in no way aiming at evangelization, IHP’s focus on the Permanent Things nevertheless inspired a wave of conversions to the Catholic faith. Included among IHP alumni are some two hundred converts, an uncounted number of reverts, an archbishop, a bishop, an abbot, a prior, a prioress, and several priests, monks, and nuns. Among its lay graduates are numerous lawyers, doctors, teachers, and professors, to say nothing of large and healthy families. Numerous programs, schools, and colleges have been inspired by IHP or founded by its graduates. Yet, despite its incredible influence, comparatively little has been written about IHP, apart from some works by John Senior himself (The Death of Christian Culture and The Restoration of Christian Culture) and Robert Carlson’s illuminating Truth on Trial: Liberal Education Be Hanged. As such, Francis Bethel’s John Senior and the Restoration of Realism is a welcome work. Written by an IHP graduate who went on to become a Benedictine monk, it is an insightful biography of a master professor by a loving student, one that could help bring the ideals and achievements of IHP to a new generation.

Although IHP was very much a team effort, this biography focuses almost solely on the life and influence of John Senior. And what a life it was! Little in Senior’s early days would have given any clue as to the kind of scholar he would become or the effect he would have on so many lives.

Born in the early 1920s to an East Coast couple of some prominence but no real religious affiliation, Senior grew up on Long Island as a happy, active lad with a particular fondness for cowboy stories and poetry. He eventually got to live the dream of so many boys of his day: He actually ran away from home to work as a cowboy in the Dakotas, an experience that never left him. After college and a stint in the military during World War II, Senior married and went into academia, earning a doctorate in literature at Columbia. There he inhaled the Marxism and Freudianism so popular at the time, but he was fortunate to study under professors like Lionel Trilling and Mark Van Doren, who were influenced by the early Great Books movement and passed that interest along to Senior.

Also influential on Senior were the authors on whom he wrote his dissertation: symbolist poets like Baudelaire, Verlaine, and Rimbaud. Senior was innovative enough to realize the degree to which these authors (and, by extension, much of modernity) were influenced by the ideals and secret practices of occultism, which also had some appeal to Senior himself. Later he would follow their lead partway down the path to various Eastern religions like Hinduism and Buddhism. Paradoxically, these studies would prove to be his salvation: As a committed husband and conscientious scholar, he could not indulge in the destructive lifestyle of cultivated dissipation recommended by the symbolist writers. Moreover, the more he studied Eastern religions, the more dissatisfied he grew with their emptiness. Like so many souls, he longed for a personal relationship with God and a validation that the world was something real and not merely an illusion.

And like so many others before and since, Senior ultimately read himself into the Catholic Church. A self-taught philosopher, he found the Western philosophy he came to study much more intellectually fulfilling than the Eastern philosophy he had heretofore entertained. The poetic idealism of Plato appealed to him, but far more convincing was the realism of Aristotle. This led him to Augustine, and especially Aquinas, who would remain a lifelong inspiration. Add to that a careful study of John Henry Newman, and the work was done: Senior converted not just to Catholicism but to a position of philosophical realism. This he would come to acknowledge as the Perennial Philosophy, as opposed to the perennial heresy, which denies objective reality and the mind’s ability to comprehend it. Senior would devote the rest of his life and career to defending the former against the latter.

Senior found himself intellectually at home in the medieval period, an era that viewed the world in symbolic terms but whose symbols were grounded in reality. With such a sacramental view of life, it is small wonder he found happiness and satisfaction as a Catholic. He would later mark the time in which civilization came to abandon that worldview (for him, the late Renaissance) as the time when modernism began and things started to Go Bad. He would also maintain a lifelong appreciation for the Benedictine way of life and recommend it as an antidote to modernism.

After having taught at Bard and Hofstra Colleges and Cornell University, Senior decided to move to a place he thought would be more connected to the land and a more traditional way of life. He returned to his beloved West, working first at the University of Wyoming and then the University of Kansas. It was at the latter that Senior, along with Quinn and Nelick, founded IHP, a two-year program inspired by the Great Books but with a difference. Lectures were free-form and team-taught by all three men, and students were prohibited from taking notes in order to increase their ability to listen and remember. Students were also encouraged to learn Latin, memorize poetry, and appreciate the natural world through stargazing. Their appreciation for beauty was stimulated by learning calligraphy and formal dance, and, in time, the professors set up several overseas study programs in places like Italy, Greece, and Ireland, so students could experience directly the places they studied. By all accounts, the program was an astonishing success, giving the privileged few who experienced it an extraordinary education that transformed their minds, souls, and lives.

Fr. Bethel does not spend too much of his book concentrating on Senior’s time at IHP, perhaps because that story has already been told in Truth on Trial and in the memoirs and recollections of many alumni. Instead, he concentrates on Senior’s educational ideals and approach to teaching. Throughout his career, Senior was animated by a poetic vision of life, which touched every aspect of how he lived and taught. As much as Senior is regarded as an educational guru (Bethel extensively considers Senior’s unpublished thoughts on primary and secondary education), the reality is that Senior had no great plan for education or educational reform. Rather, he believed that education, particularly in this tarnished era, must first and foremost touch the imagination: Until people recover a sense of wonder and a belief that things like truth, goodness, and beauty are real, and really matter, higher studies of philosophy and theology are impossible. Nor did Senior set out on any kind of organized educational crusade. Rather, he and his colleagues simply focused on doing what they did best: teaching well. Real reform and the re-creation of Christian culture, Senior thought, had to begin in the home, and the legacy of Senior and IHP would be the students whose lives were transformed.

The destruction of IHP at the hands of a hostile administration was an unsurprising outcome, and it would be too easy to tell Senior’s tale as a tragedy. Bethel does not do so, however, because such an interpretation does not fit Senior’s character. At his core, despite his joy and enthusiasm, Senior always had a melancholy disposition and knew that everything done this side of Heaven is fleeting. “Our hope is in the next world,” he always maintained, knowing that life contains tragedies as well as joys.

As someone who received an extraordinary education in truth, Fr. Bethel does not varnish some of the problems in Senior’s life. A poetic view of life is good for many things, but painstaking accuracy is not one of them, and Senior could sometimes lose or conflate specific facts beneath a poetic interpretation. (His treatment of history could sometimes be as inaccurate as Chesterton’s in this regard.) Moreover, Senior’s views on primary and secondary education were not as informed by direct experience as was his thought on tertiary education, with the result that places like St. Gregory the Great Academy in Pennsylvania, founded by IHP graduates, have had to make some changes to Senior’s plans.

Perhaps the greatest cross Senior had to bear was the wreck of Catholic culture in the wake of the Second Vatican Council. With his great love for beauty, Senior was particularly traumatized by the changes in the Mass, and he spent most of the rest of his life attending a parish run by the schismatic Society of St. Pius X. Bethel does take his beloved mentor to task for this, particularly after Senior chose not to avail himself of the licit traditional liturgies offered by the Priestly Fraternity of St. Peter.

On some level, it is possible to view Senior as a failure. IHP was destroyed, and Senior lasted only four more years before ill health forced him to retire from teaching. He spent his last years doing some occasional writing, speaking, and publishing, and at the end of his life he was pessimistic about both the state of the world and the state of the Church. He gave away nearly all his books and increasingly spent his time in prayer and preparation for death. Fittingly, he died while praying the Rosary with his wife (in 1999, at age 76). Yet, despite his apparent lack of professional success, Senior’s true legacy would prove to be the great many people he and his colleagues shaped, so many of whom have gone on to contribute to the restoration of Christian culture he so desired.

Like Don Quixote, John Senior was a noble man who stood against the spirit of the age to remind the world of a better time, and he left those he touched better for his presence. Fr. Bethel does us a great service by bringing his old mentor to our attention. We may hope that more works about Quinn, Nelick, and others in IHP will follow so as to inspire a new generation to take up the noble fight.