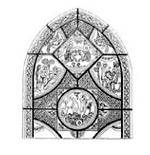 Blueprint for a Catholic Future?

By Charles A. Coulombe | September 2014
Charles A. Coulombe, who writes from Los Angeles, is the author, most recently, of The Pope's Legion: The Multinational Fighting Force that Defended the Vatican, the newly released e-book, The Legacy of Pope Benedict XVI (Diversion Books), and the just-released updated edition of Vicars of Christ: A History of the Popes (Tumblar House).

Last December I found myself in Massachusetts attending a few of the celebrations centering around the 150th anniversary of the birth of Ralph Adams Cram (1863-1942), arguably America’s greatest architect of the first half of the twentieth century — and without doubt her finest practitioner of church, library, and collegiate work in his day. He was certainly the master of the Gothic revival, though he worked successfully in other styles as well. He was the campus architect at MIT, Princeton, and Boston University, the University of Richmond, and Wheaton, Sweet Briar, and Wellesley Colleges. His work is everywhere, from the Doheny Library at the University of Southern California to the Japanese Garden at the Boston Museum of Fine Arts, from the stunning interior of St. Vincent’s Catholic Church in Los Angeles to All Saints Episcopal Church in Ashmont, Massachusetts.

The events I attended included guided tours of Cram’s estate, Whitehall, in Sudbury, Massachusetts, and its attached private chapel of St. Elizabeth’s. We also saw the graves of Cram and his family. In the evening was a 1920s-style banquet, complete with a band playing period music and guests in dinner jackets and fringe dresses. All of this was presided over by Ethan Anthony, current head of Cram & Ferguson, the master’s still-surviving architecture firm.

Not surprisingly, the 1960s through the 1990s were lean years for the company in terms of church architecture — they survived through private and corporate work. But the dawn of the twenty-first century signaled a return to the firm’s favored milieu. It began with a request in 2000 to restore Cram’s 1910 First Presbyterian Church in Far Rockaway, New York. More requests for help in refurbishing such “legacy” structures began to come in — and then entirely new commissions. Tellingly, a number of these were for Catholic parishes — a signal, perhaps, that the appetite for ugly churches has waned among us. Certainly Anthony, a Catholic himself, is overjoyed by this development.

Were his architectural legacy all there was to Ralph Adams Cram, it would be enough to ensure him a chapter — however small — in our history books. But there was much more than that. He wrote plays, a novel, and some truly horrific supernatural short stories, one of which, “The Dead Valley,” received high praise from the usually reserved H.P. Lovecraft. But it is Cram’s religious and political thought that should really command our attention.

Within Anglicanism there grew up the notion that disparate elements of Christianity, no matter how con­tradictory, could be brought to­gether.

When Invoking "the Holy Spirit" Will Justify Just About Anything

The wealthy Anglican Churches promote a radical transformation of Christianity to make it over in a way agreeable to elite society.