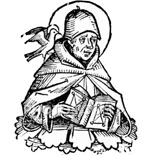 THE SLAYER OF THEOLOGICAL BEASTS

By John A. Perricone | December 2021
Fr. John A. Perricone, a Contributing Editor of the NOR, is Professor of Philosophy at St. Francis College in Brooklyn Heights, New York. His articles have appeared in St. John’s Law Review, The Latin Mass, The Journal of Catholic Legal Studies, and at CrisisMagazine.com.

Ferment in the Church appeared to reach a peak in the wake of the October 2019 Synod of Bishops for the Pan-Amazon Region. Outré theological positions crafted 50 years ago were anointed as a new normal for a novum named the Synodal Church. With each synod of the Bergoglio papacy, the Church inches toward the Anglican model. But the Amazonian synod broke new and shocking ground. It strained for nothing less than the replacement of the eternal Logos with the pagan mythos, resulting in chilling echoes of the “abomination of desolation” from the book of Maccabees.

But, surprisingly, this new theological inversion seems to be serving transcendent providential designs. This undisguised embrace of syncretism, at best, or full-blown paganism, at worst, is like ice water splashed in the face of a long somnolent Catholic faithful. Scales are falling from the eyes of scores who were once willing to “let the spirit blow where it will” or to accommodate the Church to the “spirit of the times.” They now see where that wind was intended to blow. Included among them are more and more of the Catholic intelligentsia, as well as the effete theological Brahmans seated in seminaries and universities, not a few of whom have spent the past decades playfully flirting with daringly new theological paths.

Even Catholics of a more cautious stripe have been given pause. These, once quite certain that the mere glorious exposition of the beauty of the faith would be sufficient to bring the Church’s enemies to their senses, have been shaken. These Catholics are the ones once loath to speak ill of error, to punish, or ever to use prohibition from Holy Communion as a “weapon.” Yes, even such as these are waking to the bitter price of irenicism. Hands-off toleration is showing its real face, and those dear Catholics are regretting their half-century exercise in naïveté. It seems they never learned the lessons given at our mothers’ knees: God helps those who help themselves. Ignoring that truism leads down the road of presumption. Irenicism only feeds the theological beast, and soon the beast begins to feed on the innocent.

Perhaps it is time for the Church to unchain her own slayer of theological beasts, St. Thomas Aquinas. For too long, the Common Doctor has been relegated to an inglorious exile. For well-nigh half a century, the conventional theological class has sedulously censored St. Thomas when not vilifying him. Even when invoked — remember Transcendental Thomism and the nouvelle théologie? — it was only through the lenses of Kant and Heidegger, effectively neutering him. To their mind, for good reason. These au courant theologians knew well that the writings of the Angelic Doctor form the thick steel wall protecting the faith against the seepage of modernity. Tear it down, and the faith is fatally exposed. This is not hyperbole; it is the Magisterium.

Ed. Note: The first installment of this two-part series appeared in our May issue.

Thomism is an integral part of the millennial flow of Western thought and cannot simply be consigned to the dustbin of misguided and superseded systems of philosophy.