Volume > Issue > An Inside Report on Diocesan Journalism 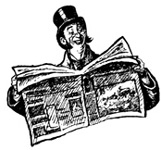 An Inside Report on Diocesan Journalism

THOU SHALT BE INOFFENSIVE & INANE

By Sean Salai | April 2004
Sean Salai graduated from Wabash College, class of 2003, with a B.A. in History. His writings have appeared in Chronicles, Civil War Book Review, and The Washington Times. He is a Contributing Editor to the 5th Edition of Choosing the Right College, due from ISI Books in 2005.

When I graduated from college last May, I sought out a reporting job at the nearest diocesan newspaper. Most of my family and friends were puzzled, even disappointed. They expected someone with my “potential” — investigative writing awards, more than 40 clips from interning at a national daily newspaper — to try for something bigger.

“The Church today wants idiots in its administration,” wrote one of my professors, in lieu of congratulations.

I was burning with the perhaps naïve desire of a convert to serve Christ’s Church. During my junior year at college, after many years of consideration, I left the Lutheran ecclesiastical community and was confirmed in the Catholic Church. I had made several Catholic friends through the campus Newman Center — friends who lived their faith, praying the Rosary every night — and I knew Catholicism was for me.

As graduation loomed, I considered high-profile job opportunities on the East Coast. But, as some friends joked, I was becoming “more Catholic than most Catholics.” I had little desire to conquer the world. After countless hours meditating in front of the Blessed Sacrament, I discerned that God wanted me to remain in the Midwest, close to my family.

So I accepted the job with the diocesan paper. Now, half a year later, I again find myself looking for employment.

The Glorious Shame of The Catholic Church

These are times of chastisement for the Catholic Church. Christ will simply not allow His wayward Bride to become a slut.