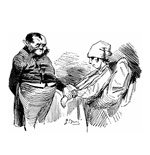 By Regis Scanlon | October 2009
Fr. Regis Scanlon, OFM Cap., is the director of Catholic Prison Ministry for the Archdiocese of Denver, where he is also chaplain for the Missionaries of Charity's shelter for homeless women. His articles have been published in Homiletic & Pastoral Review, The Catholic Faith, Soul Magazine, Pastoral Life, and The Priest. He has also made two series for Mother Angelica's EWTN: Crucial Questions, Catholic Answers and What Did Vatican II Really Teach?

A number of Catholic hospital administrators and medical personnel have been quite concerned since they heard that U.S. President Barack Obama plans to strike down his predecessor George W. Bush’s “conscience clause” for medical workers. President Bush’s conscience clause prohibits discrimination against doctors, nurses, pharmacists, and other healthcare workers who refuse to perform or assist with abortions or sterilizations due to their religious or moral objections to such procedures. According to the Washington Post, President Bush’s regulation “cuts off federal funding for thousands of state and local governments, hospitals, health plans, clinics and other entities if they do not accommodate doctors, nurses, pharmacists or other employees who refuse to participate in care they feel violates their personal, moral or religious beliefs” (Feb. 28). Bush’s regulation, penned in the waning moments of his presidency, sought to protect healthcare workers who were “increasingly being fired, disciplined or penalized in other ways for trying to exercise their ‘right of conscience.'”

When President Obama delivered his May 17 commencement address at the University of Notre Dame, he raised the hopes of many Catholic healthcare workers by saying, “Let’s honor the conscience of those who disagree with abortion, and draft a sensible conscience clause, and make sure that all of our healthcare policies are grounded not only in sound science, but also in clear ethics, as well as respect for the equality of women.” However, the Post later reported that at a July 3 press conference President Obama “said he is a ‘believer in conscience clauses’ and supports a new policy that would ‘certainly not be weaker’ than the rules in place before the expansion late in President George W. Bush’s administration” (July 3).

What did President Obama have in mind when he said that we should all work together to “draft a sensible conscious clause”? Will he suggest that, if medical personnel cannot in good conscience assist someone seeking an abortion or sterilization or administer the “Plan B” morning-after emergency contraceptive/abortion pill, they will have to refer the person to someone who will? This is what’s known as the “referral solution.”

Ex-abortionist Dr. Nathanson refers to “permissive abortion” as a “crime” and “an unmitigated evil."

According to Planned Parenthood, abortion can be “a positive experience.” Children must be taught not…