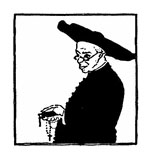 FAITH IN THE DENIAL OF REALITY

By Timothy D. Lusch | November 2016
Timothy D. Lusch is an attorney and writer. His work has appeared in Saint Austin Review, Crisis, and New English Review. He blogs at www.pityitspithy.com.

In that liminal space between a martyr’s temporal suffering and his eternal reward, Fr. Jacques Hamel, before having his throat slashed by Muslim supremacists, commanded his attackers to “go away, Satan.” A genuinely distressed Pope Francis condemned Fr. Hamel’s murder as “absurd.” Their respective responses to this act of Islamic terror highlight the alarming dissonance between the lived reality of the faithful and the distant deliberations of Church leadership. By no means are our princes and prelates alone in their exercise of denial about Islam, especially in the feckless firmament of Barack Obama, François Hollande, and Angela Merkel, but their misunderstanding is more egregious. Apart from the obvious academic pedigree most bishops and cardinals possess, they have a grave responsibility as shepherds of the flock. Because of advanced education, their misunderstanding is inexcusable. Because of grave responsibility, it is indefensible.

What the Catholic hierarchy lost in authority, credibility, and trust in recent decades, it gained in forgiveness and vigilance from the laity. We recognize that we must forgive their human failures, but we must also remain vigilant for wolves in shepherds’ clothing. And so it is all the more astounding in the wake of the clergy sex-abuse scandal that many Catholic bishops are in denial about the cause of suffering of the victims of Islamic terror. While no two scandals are alike, to be sure, responses to them certainly may be.

In a year that witnessed the horrors of Orlando and Nice, among more than a thousand Islamic terrorist attacks worldwide, the Catholic hierarchy has studiously avoided the elephant in the room. Pope Francis alternately referred to such attacks as “senseless,” “absurd,” and “blind violence.” And lest any of the faithful think we are better than Islamic terrorists, he informed us with a muddled moral equivalence that “if I spoke about Islamic violence, I would also have to speak about Catholic violence.” He then offered an odd comparison: “I don’t like to speak of Islamic violence because every day when I open the newspapers I see acts of violence, here in Italy: someone kills his girlfriend, someone else his mother-in-law…and these violent people are baptized Catholics! They are violent Catholics.”

After the mass shooting at the Orlando Pulse gay nightclub, and despite perpetrator Omar Mateen’s profession of faith in Islam (and acting to carry out Islam’s death penalty for homosexuality), Bishop Robert Lynch of St. Petersburg, Florida, in like manner to the Pope, blamed religion generally, and the Catholic religion specifically, for Mateen’s act of terror. He said, “Sadly it is religion, including our own, which targets, mostly verbally, and also often breeds contempt for gays, lesbians and transgender people. Attacks today on LGBT men and women often plant the seed of contempt, then hatred, which can ultimately lead to violence.”

How can the Synod on Synodality be a rebalancing of ecclesial powers? It is, after all, the brainchild of the most powerful of ecclesial figures.

On Reunion Between East and West

Reunion between the Catholic and Orthodox Churches should be the foremost focus of Catholic relations with other ecclesial bodies.