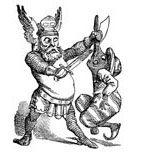 THE RISE & FALL OF THE THOMISTIC RENEWAL — PART II

By D.Q. McInerny | June 2015
D.Q. McInerny is a professor of philosophy at Our Lady of Guadalupe Seminary in Denton, Nebraska. He holds B.A., M.A., and Ph.D. degrees in philosophy from the National University of Ireland, University College Cork. Among his latest published books are Natural Theology (2005), Epistemology (2007), An Introduction to Foundational Logic (2012), and The Philosophy of Nature (2014).

Ed. Note: The first installment of this two-part series appeared in our May issue.

We return to the question posed in Part I: How to explain the extraordinary collapse of the Thomistic renewal? I submit the following: First, the collapse was a particular expression of a larger phenomenon of which it was but a part; second, it was the result of a pervasive mania for change; third, it was the targeted victim of a resurgent modernism. While these items do not provide a complete explanation, they do go some distance toward providing at least an adequate one.

The profound disruption suffered by the Thomistic renewal was a particular instance, a specific manifestation, of the widespread consequences of the disruptive forces at play within the Church at large in the period immediately following the Second Vatican Council — a period of prolonged disorientation and disorder, which at certain times and regarding certain matters, was quite severe. We might think of the situation in metaphorical terms, as if the Church experienced a massive spiritual and cultural earthquake. The edifice that was the Thomistic renewal was unable to withstand the violent tremors, and its walls came tumbling down.

The Thomistic renewal was not alone in this regard; there were other edifices that suffered damage extensive enough to warrant the word collapse: the ancient Latin liturgy, catechesis, religious orders, and, to one degree or another, Catholic education at every level. As to the broader picture, the Church before and after Vatican II is a study in dramatic contrasts. It is as if we were viewing two entirely different Churches. For someone for whom the “after” picture does not represent an improvement over the “before” picture, the question naturally arises: How is it possible that an institution that on one day appeared to be in a robust state of health was, on the very next day, in need of immediate therapeutic attention? A possible answer to this question, and one that is perhaps more obvious than we are prepared to admit, is that appearances can be deceptive. What looked like robust health was only seemingly so. Now, might it be that a comparable response could be made with regard to the state of the Thomistic renewal before its collapse? As it happens, a response of precisely that sort has been made, a point to which we will return presently.

In the wake of Vatican II, a veritable mania for change roared through the Church, and many Catholics were swept off their feet and lost a balanced perspective. It was as if change had become the supreme imperative for the Church, as if her principal mission in the world were to change, simply change, otherwise she would somehow not be acting according to a correct reading of “the signs of the times.” What was especially peculiar about this near obsessive concern with change is that it was, in many cases, indiscriminate to the point of mindlessness. It became a matter of change for the sake of change, as if virtue lay in pure process, never mind where the process might be leading us. Although there was little reasoned specificity as to what would be put in place by change, there was remarkable clarity of vision as to what had to be replaced by it: just about anything that had to do with the pre-Vatican II Church.

Aquinas for the Rest of Us

Man is part of the world and also separate from it, embedded in a spiritual hierarchy that stretches infinitely beyond what we can see, touch, and hear.