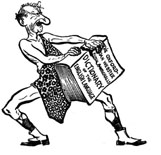 At least six different linguistic concoctions exist in the media’s lexicon for killing: abortion “rights”; the “right” to a woman’s body; the “right” to choose; women’s “rights”; privacy “rights”; and reproductive “rights.” At the same time, the most fundamental right of all, the right to life, is censored by the media, effectively erasing it from public discourse and thus from public thought. Pope John Paul II spoke on this grave moral evil in his encyclical The Gospel of Life: “The moral conscience, both individual and social, is today subjected, also as a result of the penetrating influence of the media, to an extremely serious and mortal danger: that of confusion between good and evil, precisely in relation to the fundamental right to life…” (#24).

The culture war is largely a war of words, and no one fights it better than the media. They know better than anyone that if you want to change the way people think, just change the words. As verbal engineering has preceded today’s abortion culture, honest vocabulary is vital to restore life’s protection. The following analysis explains a few of their deceptions and how they market the Culture of Death. Honest phrasing is given to restore life’s dignity.

Clinics are for health care — and health care excludes killing. Calling the place where someone is killed a “clinic” assaults the dignity of the one who is killed. Instead, the places where unborn people are killed are abortion sites, child-killing sites, abortion chambers, abortion mills, and abortuaries. Proper phrasing disconnects killing from health care and instills sensitivity for the lives of unborn people.

Murder is not an issue or debate because life is a human right. As a human right, a moral duty exists to defend it, even by those who advocate its destruction. The term abortion problem is the correct wording because it is the problem of murder itself.

The Road to Hitler Was Paved With Abortions

The Weimar Republic was distinguished by "the lowest birth rate in the Western world." Contraception was widespread and abortion laws were liberalized.