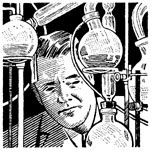 A Primer on Stem Cells

IT'S NOT REALLY COMPLICATED

Human development begins when the head of a male gamete (sperm cell) penetrates the cell wall of a female gamete (ovum or egg), the nuclei of the two cells fuse together, and the genetic material (DNA) from both cells — 23 chromosomes each — combine. This process, which is called fertilization or conception, gives rise to an entirely new and genetically unique individual called a zygote. The zygotic individual contains all the genetic information and dynamism necessary to orchestrate its development from a zygote to an embryo, to a fetus, an infant, toddler, adolescent, and adult. The capacity of this single-celled human zygote to develop into an organically mature human person (i.e., the capacity for total human development) is termed totipotency.

The developmental process continues with the first cell division. In the hours after fertilization, the single-celled zygote divides into two identical cells, both of which are totipotent. The pair of cells divides again, producing four totipotent cells, and again, producing eight, and so on.

At approximately day five, the aggregate of totipotent cells begins to take the specialized form of a hollow sphere of cells, like a tiny basketball. The sphere has a layer of cells on the outside and a cluster of cells on the inside called the inner cell mass (picture a clump of attached marbles inside a basketball). The individual at this stage is called a blastocyst. The outer cell layer of the blastocyst will go on to form the placenta and other supporting tissues needed for fetal development in the uterus, while the cells of the inner cell mass — also called stem cells — will go on to form virtually all the organs and tissues of the human body. Although the inner cell mass cells have the capacity to form virtually every type of cell in the human body (e.g., cardiac, neural, muscular, skeletal), they can no longer form a total organism because they are unable to give rise to the placenta and supporting tissues necessary for development in the uterus. So although they are not totipotent, each inner cell mass cell (i.e., each stem cell) is still pluripotent (i.e., while unable to develop into a complete organism, each cell has the potential to develop into the different tissue types in the human body).

In time these stem cells will undergo further specialization into specialized stem cells committed to specific kinds of tissue production (e.g., blood stem cells, cardiac stem cells, neural stem cells). Once a stem cell’s code is “turned on,” it is no longer pluripotent, but rather multipotent (i.e., has the capacity to generate a particular type of tissue).

Standing Seldom by the Crib, But Often by the Coffin

As we bury our parents and watch our circle of family diminish, will we finally humble ourselves before God and ask forgiveness for rejecting the gifts He had to give us?

Stirring Things Up in Western Europe

Many peace & anti-abortion advocates find themselves on opposite ends of the political spectrum. In the U.S. and Western Europe, stirring up the desire for reconciliation is a crucial task.