Volume > Issue > A Permanent Scandal to the World 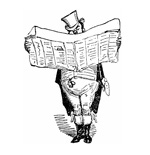 BAD PRESS AS AN ARGUMENT FOR THE CHURCH

By Chene Richard Heady | September 2010
Chene Richard Heady is Assistant Professor of English at Longwood University in Farmville, Virginia. His articles have been published in Touchstone, Renascence, The Catholic Digest, and other periodicals.

The son of a Pentecostal father and a lapsed Catholic mother, I was received into the Catholic Church in 1993, largely under the influence of John Henry Newman. I was a Bible-college student when I first encountered Newman’s case for Catholicism, so I’d already been in the habit of studying Scripture and pondering the nature of the early Church. Newman’s Essay on the Development of Christian Doctrine (1845) convinced me that the Catholic Church is the organic heir of the Church of the Apostles. He demonstrates convincingly that the Catholic Church possesses a unique ability to develop through time and expand across space, assimilating new philosophies and cultures, while still preserving intact the vision and type of apostolic Christianity. Like many before me, I was — and remain — persuaded by his ideas.

But one of Newman’s apologetics for the Catholic Church always troubled me. It actually struck me as an argument against the Catholic Church, or at least against the Catholic Church as I had witnessed her in my lifetime. In his Lectures on the Present Position of Catholics in England (1851), Newman asserts that if the Catholic Church is spiritually legitimate, then she ought to be under continual assault by secular governments and the secular press. In this work Newman describes a cultural environment that should be familiar to American Catholics in 2010. In Victorian England, the Catholic priest was commonly portrayed as a sexual predator preying on youths of both sexes; this was a polemical inversion of the argument for clerical celibacy, as many scholars have noted. Many Victorians even believed that priests kept their sexual victims locked in underground cells, and Newman narrates with some dark comedy how his own attempt to construct a vegetable cellar came to be reported in the popular press as proof of the legend!

Contempt for Catholic clergy ran so high that Newman felt sure that if he were to tell an Englishman “of ordinary intelligence” that “priests can live in purity,” he would meet the incredulous reply, “What is the world coming to?… So, Catholics are to be whitewashed! What next?” This attack on Catholicism was carried out most vigorously in the Victorian news media, which were armed with a ready-made narrative of the iniquities, acts of oppression, and corrupt conspiracies of that arch-enemy of progress and enlightenment, the Roman Catholic Church. Each newspaper rushed to rake up, print, and publicize any incident — past or present, reliable or unreliable — that seemed to confirm this fable.

Newman’s words could have been written this morning. He laments “those ever-growing files of newspapers, whose daily task…has been to cater for the gross palate of their readers all varieties of…invective against us.

Mariology: The Essence of Rome's "Errors"?

Karl Barth, speaking for classical Reformation theology, wrote in his Church Dogmatics: “In the doctrine…

The Malines Conversations & What Was Malign There

Keep in mind St. Paul’s dire warning that heresies would of necessity come so that the genuine faith of the elect may come to light all the more strongly.

The son of a Pentecostal father and a lapsed Catholic mother, I was received into…