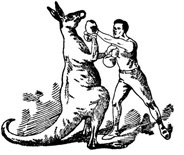 A One-Two Punch For Orthodoxy

As those of you who have read our November 1996 and March 1997 editorials know, we’ve been wanting to strengthen the NOR’s witness to Catholic orthodoxy at this crossroads in Church history by expanding the size of the magazine. We explained that to do that we’d need to raise at least $57,000, and we are delighted to report that we have reached our goal.

Most donors have received a personal thank-you letter. But again, we say: Thank you!

Lord willing, beginning with the November (or December) issue, you will have a beefed up NOR – without any increase in subscription rates! — and the forces of orthodoxy will have a more formidable NOR.

Now for the details: We were surprised to receive a group of letters (usually with donations) from readers who, while supporting our desire to enhance our efforts on behalf of orthodoxy, said they had strong reservations about adding pages to the NOR. This was a minority viewpoint, but these folks made a point that needs to be addressed. They stressed that they like the 32-page length of the NOR because the magazine is short enough to be read cover-to-cover. They said the NOR is tightly edited (ah, it’s been noticed!), which makes it all the more engaging and readable. They mentioned certain other “fatter” Christian magazines they subscribe to, complaining that those periodicals are too loosely edited and long-winded, or too padded with mediocre material, to be worth reading in their entirety. Quantity, they said, often wars against quality. They said their time is scarce, and they don’t like to have to hunt through a thick magazine searching for good reading. So the challenge before us is to expand without compromising our commitment to excellence.

A new Vatican document makes it clear that the old Latin and new vernacular Masses are both valid, a distinct refusal of liturgical absolutism.