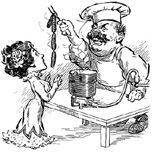 CAN YOU JOIN THE ELITE?

By Wayne Lela | April 2002
Wayne Lela is a member of the Committee on Family and Social Health, a group of writers and activists in the Chicago area. Copyright © 2002 Wayne Lela.

You know you are a liberal if:

(1) You say we should not be judgmental, but you judge and condemn sexists, racists, “homophobes,” et al.

Or (2) you say we cannot legislate morality, but you push for laws that legislate your morals or values (by outlawing “hate crimes” and “racist” behavior, for example).

Or (3) you condemn sexism, but allow sexist abortions. (Many unborn female babies are aborted because in some cultures females are deemed inferior to males.)

Or (4) you condemn racism, but allow racist abortions. (A white woman impregnated by a black paramour can choose to abort a black fetus.)

Or (5) you condemn discrimination against the handicapped, but allow somewhat physically-compromised unborn babies to be aborted.

Or (6) you condemn so-called homophobia, but would allow “homophobic abortions.” (If we ever find a “homosexual gene,” liberals would allow the abortions of fetuses carrying that gene.)

Or (7) you believe in abortion-on-demand, but you also believe in “animal rights.”

Not the Whole Story

Review of Race by Studs Terkel