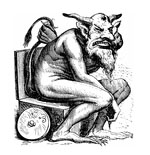 AMONG THE MANY COUNTERFEITS

By Richard E. Gallagher | March 2008
Richard E. Gallagher, M.D., is a board-certified psychiatrist in private practice in Hawthorne, New York, and Associate Professor of Clinical Psychiatry at New York Medical College. He is also on the faculties of the Columbia University Psychoanalytic Institute and a Roman Catholic seminary. He is a Phi Beta Kappa graduate of Princeton University, magna cum laude in Classics, and trained in Psychiatry at the Yale University School of Medicine. Dr. Gallagher is the only American psychiatrist to have been a consistent U.S. delegate to the International Association of Exorcists, and has addressed its plenary session.

Amid widespread confusion and skepticism about the subject, the chief goal of this article is to document a contemporary and clear-cut case of demonic possession. Even those who doubt such a phenomenon exists may find the following example rather persuasive. For clergy, or indeed anyone involved in the spiritual or psychological care of others, it is equally critical, however, to recognize the many and infinitely more common “counterfeits” (i.e., false assignations) of demonic influence or attack as well.

This need for caution and precision is especially important at a time when untrained laymen or, worse, public ministries may unfortunately mislead or even exploit the faithful in this area. One has only to turn on a television to witness obvious abuses — for instance, tele­vangelists’ dunning their audience for cash as they conduct exhibitionist ceremonies before large assemblies of the overly credulous. Sharp distinctions — long known to traditional theologians, but now often ignored — need to be drawn.

Possession is only one and not the most common type of demonic attack. Possession is very rare, though not as exceedingly so as many imagine. So-called “oppression,” or “infestation,” is less rare, though hardly frequent either, and sometimes more difficult to discern accurately.1 For our purposes here, a truly “possessed” individual exhibits so massive and unequivocal an assault that we will use it as the paradigmatic example of a genuine demonic attack. This case will be contrasted not to the many lesser degrees of demonic assault, but rather to the varied kinds of purported demonic involvement — often psychotic conditions — that turn out to have a purely natural explanation.2 These states should be more widely recognized as such by religious practitioners. This need is especially great among the many laymen now in deliverance ministries, a rapidly growing worldwide phenomenon.3

Do we have a means by which to judge between true and false possession? Dr. Jean Lhermitte says yes, we do, to an extent.