Volume > Issue > A Call to Arms 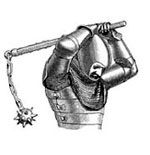 A Call to Arms

By F. Douglas Kneibert | June 2014
F. Douglas Kneibert, a retired newspaper editor and a convert from Protestantism, is a former vice chairman of the board of directors of the Vitae Foundation, which uses mass media to promote a culture of life.

In 1563 the Council of Trent concluded its monumental work of reforming the Church, further defining Catholic doctrine, and confronting the Protestant Reformation just as a series of religious wars were erupting that would inflame Europe for more than eighty years. It was in this context that the Council introduced a new term, ecclesia militans, the “Church militant,” which it defined as follows: “The Church militant is the society of all the faithful still dwelling on earth. It is called militant because it wages eternal war with those implacable enemies, the world, the flesh and the devil.” (The other constituent parts of the one Church are the “Church triumphant” in Heaven and the “Church suffering” in Purgatory.)

The war that Trent identified is unending, having always been part of the human experience. But the manner in which our enemies manifest themselves changes with the times. Satan tailors his temptations to suit the spirit of the age, as does the world. Even the enticements of the flesh can assail us in different ways in different periods. Moreover, the world, the flesh, and the devil don’t always present themselves to us as separate, sharply defined entities, but can be intertwined in often complex ways. In identifying our enemies, the Council’s use of the word implacable commands our attention. Implacable enemies are those “not capable of being appeased.”

Was Trent saying that the physical world is the enemy of the Church? By no means. The Greek word kosmos, translated as “world” in sacred Scripture, is used differently in various contexts. It can refer to the physical world, or universe, that was spoken into being by God, who pronounced His creation “very good.” But kosmos, as used by the sacred writers, can also refer to the “world system” that is hostile to God’s Kingdom. Ours is a fallen world, the result of original sin that disrupted the harmony between God and man. The devil, who engineered the Fall, is the “ruler of this world,” according to Jesus (Jn. 14:30). St. John even says that “the whole world is in the power of the evil one” (1 Jn. 5:19). In what sense is that true?

Here we are grappling with the mystery of evil, and there are no ready answers. We know that a good God is sovereign over all His creation, yet He permits the devil certain leeway (see, for example, the Book of Job). The Church teaches that sin is the seedbed of evil; according to St. Thomas Aquinas, God permits evil “in order to draw forth some greater good.”

The New Testament has much to say about the world’s allurements and its way of thinking and acting — and none of it is good. Never once are we urged to follow its lead down the broad, neon-lit thoroughfares that beckon us in all directions. Something akin to a spiritual balancing act is required to discern how we can enjoy the world without being molded by it.

For Catholic wives, husbands, mothers, and fathers immersed in the culture of death, her prayers are a beacon of hope, a sign that we are not isolated.